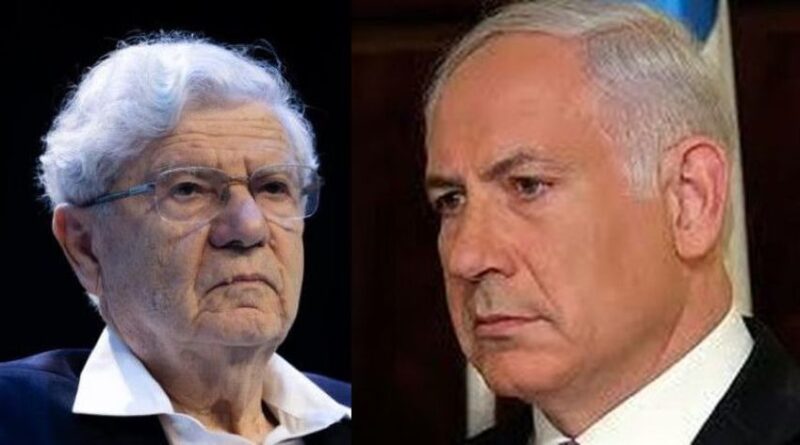 In a race against the clock, Attorney General Amihai Mandelblit has less than two weeks before he steps down to approve a plea bargain for releasing opposition leader Binyamin Netanyahu from a bribery charge and jail time, leaving only the lesser charges of breach of faith and fraud and community service. The charge of moral turpitude that would bar Netanyahu from public office for up to seven years remains to be thrashed out in negotiations for a deal, before the prosecution presents it to the district court.

But meanwhile, Mandelblit suddenly finds himself overwhelmed and outclassed by two extremely high-profile figures who are acting in concert. None other than Aharon Barak, highly esteemed as former chief justice, attorney general and state prosecutor, has entered the scene out of the blue to sponsor a plea bargain deal for the opposition leader, in the middle of the dragging Netanyahu corruption trial before the Jerusalem District Court.

The Netanyahu-Barak partnership has hit the political scene with the force of a thunderclap. Each has something to gain from a deal to cut short the ex-prime minister’s trial. Netanyahu, who has proclaimed his innocence long and loud, can’t foretell the court’s verdict. The legal fees of a drawn-out process could leave him financially ruined. He may decide that shortening the process is the lesser gamble.

And retired justice Barak has an interest in putting back together the justice system which Netanyahu shredded systematically after he was accused, by reiterating that the charges against him were trumped up. Israel’s longest-running prime minister (until the incumbent administration took power last June) was merciless in accusing law enforcement, the prosecution and the entire justice system of staging a “coup” to engineer his ouster from power by unfounded charges.

Strongly implying the former prime minister’s willingness to repent, Barak went on the air this week to commend Netanyahu as one of the most faithful supporters of the high court of justice in the years before he faced charges. Barak’s intervention aimed equally at persuading the same justice system of relenting on the most serious charges against him. This put Mandelblit, who powered the charges against the former prime minister, in a quandary.

The new message was, however, swiftly picked up as a guideline by the high court and Chief Justice Esther Hayut. On Monday, Jan. 17, this court dismissed a petition to disqualify the plea bargain negotiated by Mandelblit with former interior minister, ultra-Orthodox Shas leader, Aryeh Deri. This deal let him off the hook on the moral turpitude issue and excused him from prison in the tax evasion case against him. It also offered the Netanyahu case a timely precedent.

The Barak-Netanyahu duo has meanwhile blew up at mid-center of the political scene. The incumbent eight-party government coalition, which is united by little except their determination to keep Netanyahu out of power, could only fumble for a response. It stunningly sidelined its three leaders (and rivals), rightist prime minister Naftali Bennett, centrist foreign minister Yair Lapid, who is due to take over as prime minister at half-term and defense minister Benny Gantz, who has his own aspirations. Some rightwing members, seeing that the Likud leader may no longer be treated as yesterday’s man, began entertaining second thoughts about their new careers with the “government of change.” Could it be that the Netanyahu-Barak combo was powerful enough to take center stage tomorrow?