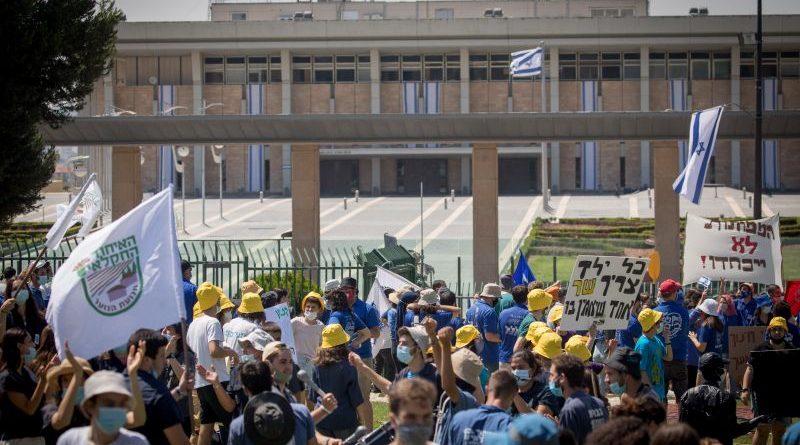 The new law grants the government wide-ranging powers for emergency measures to fight covid-19. Prof. Ronnie Gamzu is appointed coronavirus commissioner.
The Knesset vote Wednesday night, July 22, granted the government broad emergency powers through June 2021, including the authority to impose a full lockdown, for curbing the coronavirus spread. The law was passed by a vote of 48 to 35 with no abstentions. The original text would have allowed the government to bypass parliament and introduce emergency regulations and restrictions with immediate effect. According to a key amendment, four parliamentary committees will have 24 hours to challenge them. Those committees are Welfare, Education, Economic and Constitution. The coronavirus committee which overturned the latest round of government restrictions was left out of the process.

It was feared that the ultra-religious parties would oppose the law in fury over the passage earlier on Wednesday of a law banning gay conversion therapy. They came around to a decision not to undermine a measure devoted to saving lives. But they may well rock the government by settling accounts with alternate prime minister Benny Gantz’s role before the time comes for his takeover as prime minister next year.

Prime Minister Binyamin Netanyahu backed down against Yuli Edelstein, Health Minister and a member of Likud on the appointment of a coronavirus czar. The minister refused to share his department’s fields of authority with Prof. Gabriel Barbash, Netanyahu’s choice. The PMO’s announcement of the appointment was delayed for three days by this argument, at the end of which the professor dropped his candidacy and made way for another professor, Ronnie Gamzu, with similar experience as Director of the big Tel Aviv Ichilov hospital and former ministry director-general.

This decision had become more urgent than ever before – not just for the immediate need to halt the rising level of the virus, but for getting the country ready for the winter when a major covid-19 assault is expected. Another 2,000 infections were reported on Thursday morning, raising the total to 56,085 with 32,345 active cases and 273 in serious condition. The number of deaths rose by 2 to 430.

The public increasingly fed up with the edicts that switch between sudden closures and their cancellation, with disastrous effects on small businesses. The government will now have to give businesses due notice of closures. Delays in compensation and aid for the sectors hit hardest are causing deep anger. Anti-government demonstrations are becoming wilder and more diverse, embracing larger numbers of disaffected groups.

Under the new law, the government will not have the power to prevent demonstrations, prayers or religious ceremonies, only to use the police to enforce compliance with health rules.

The sense of uncertainty on Israel’s streets is palpable. It is colored by the cracks in the government coalition which have also infiltrated the Likud where Netanyahu’s leadership is being tested as never before. Politicians on all sides are talking openly about the government’s imminent fall and yet another election. The next test is imminent. If the government fails to carry the state budget by the August 25 deadline, the incumbent Knesset automatically dissolves for elections on Nov. 17.

However, the prime minister and his partner, Defense Minister Gantz are still at loggerheads. The former insists on presenting a one-year budget for the remaining months of 2020 while Gantz is insisting on a biannual budget covering 2021. If they can’t come to terms in time, both will have to confront the voter with a less-than shining record of their short-lived unity government which by then will only have survived for three months.