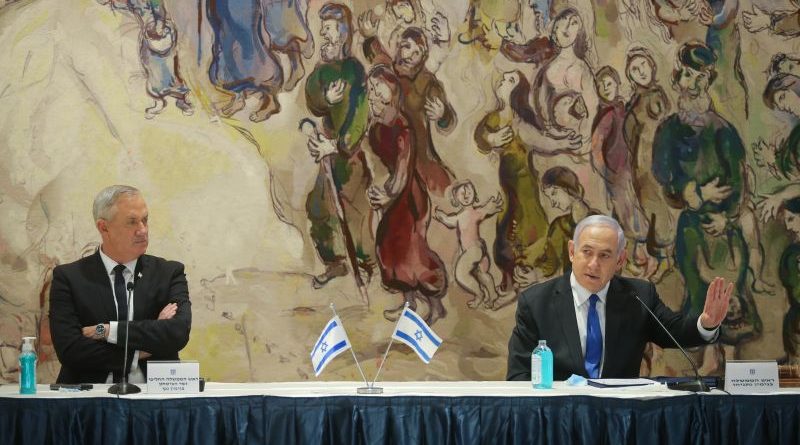 The traditional long table around which the ministers held cabinet meetings in the past is not long enough to seat 36 ministers and, anyway, crowding is barred by coronavirus guidelines. In the first cabinet meeting on Sunday night, May 17, after their swearing in by a Knesset vote of 73 to 46, the ministers sat in rows on well-spaced chairs facing the two leaders, PM Binyamin Netanyahu and alternate PM Benny Gantz.

Looking around them, most of the new ministers encountered unfamiliar faces belonging to the opposite camp. They also found it hard to grasp the strange structures of the new departments. The Higher Education Minister, Zeev Elkin, was, for instance, also awarded Water Resources, Finance Minister Yisrael Katz was stripped of Government Corporations, and Community Advancement Minister Orly Levi Abakasis ended up with units that once belonged to the Community Development and Welfare Ministries. New Housing Minister, the UJA’s Yacov Litzman, had gained control of the Israel Land Authority.
The two prime ministers may decide that getting this odd ministerial choir to sing from the same page can’t be done overnight. Under their unity accord, each has veto power over the other’s legislation. Since both these features have the potential to deep-freeze the government’s ability to perform, Netanyahu and Gantz may well resort to a kitchen cabinet to get things done for the time being.

The second priority listed by Netanyahu at Sunday’s first cabinet meeting was passing the state budget and reviving the economy, which would need time for restoring to its pre-pandemic level. The new government has a meager 90 days for presenting the budget to the Knesset.

Netanyahu’s first priority was the health crisis, which he warned could return at any moment. The third was continuing to combat Iran – its presence in Syria and acquisition of a nuclear bomb; the fourth was the “strategic threat” posed by the International Criminal Court’s probe of alleged Israel war crimes; and the fifth was the “diplomatic issue” of extending sovereignty to the Jewish areas of the West Bank and the Jordan Valley. He announced he intended to bring this step before the entire cabinet quickly.

On this item, the prime minister faces equivocation from his largely centrist and partially left-of-center partner who will find support from most of the the Knesset support – particularly if the international and regional fallout is severe. Jordan’s King Abdullah has already threatened a “massive confrontation” if this plan goes ahead. Europe is lining up for a major battle and Israel is bracing for a new surge of Palestinian terror.

To keep a firm grip on his 18 months as prime minister, Netanyahu took care to control the national purse strings: Katz as finance minister and Moshe Gafni (UJA), who stays put as chairman of the powerful Knesset Finance Committee.  Through them, the prime minister can control the allocation of operating budgets to the assorted ministers and their departments.

With an unprecedented 26pc unemployment rate, more than 76,000 ruined businesses, including the entire tourist industry. all clamoring for aid, and a deepening deficit, broad budget cuts are unavoidable. Operating funds for the new ministers will be slashed to the minimum.The battle for allocations promises to be even more cutthroat than the fight for ministerial seats in the Likud party.

Gantz, alternate prime minister who takes the wheel on Nov. 17, 2021, is meanwhile acting to shore up his ranks. He is pushing forward fast legislation requiring five of his Kahol Lavan party’s 18 ministers to relinquish their Knesset seats to make room for five new party lawmakers further down the list.

Netanyahu’s most pressing priority is bound to be the opening next Sunday of his long-awaited trial before the Jerusalem District Court on charges of bribery, fraud and breach of faith. Questioned after he was sworn in on Sunday night, he said he would present himself for trial. “I don’t think that there will be a single stone left of the fake charges against me. This is a joke, but I will be there and do what is demanded by the law.”