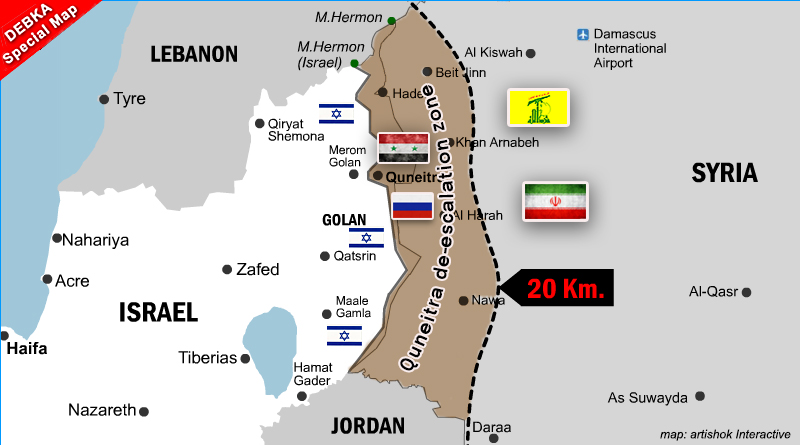 DEBKAfile: A major Israeli concession made it possible for Moscow to walk off with a big gain for its allies in the Nov.8 Trump-Putin memorandum for Syria, DEBKAfile reports.
The strong pledges made by Prime Minister Binyamin Netanyahu, Defense Minister Avigdor Lieberman and Chief of Staff Lt. Gen. Gady Eisenkott – that Iran and Hizballah would not be permitted to establish a permanent military presence in Syria and come close to the Israeli border – have melted away in secret bargaining sessions. Israel was finally forced to agree to their presence as close as 20km from its northern Golan border with Syria, backing away sharply from its original demand of a 50km buffer zone.
In consequence, a 20km deep area (see map) in the Quneitra region of the Syrian Golan will serve as a “de-escalation zone,” in accordance with the second Syria memorandum agreed between Presidents Donald Trump and Vladimir Putin. The zone will be monitored by Russian troops with Syrian forces available for their use.

Israel’s unwilling consent to this arrangement was an unforeseen and major concession.
Clause 2 of the memorandum affirms US and Russia consent to the continued operation of the de-escalation zone in the Daraa region (opposite the Jordanian border) and the Quneitra region (opposite the Israeli border) that were first set up by the Trump-Putin July 7 summit in Hamburg.
That clause states: “The US, Russia and Jordan on November 8 called for the “reduction and ultimate elimination of foreign forces” – particularly Iran and Lebanese Hizballah – in southern Syria.”
The presence of Syrian forces in these regions is implicitly sanctioned. However, in realistic terms, “Syrian forces” anywhere in the country automatically entail Iranian officers and Hizballah – not to mention Shiite militias and Revolutionary Guards personnel. The simple fact is that, apart from a few scattered units, not much is left of the “Syrian army” after nearly eight years of civil conflict.
DEBKAfile’s military sources note that no date was set in either deal for the “reduction and ultimate elimination of foreign forces” in southern Syria. Therefore, there is nothing to stop the Iranian and Hizballah military presence just 20km from northern Israel from becoming an established fact for an indefinite period. Furthermore, there is no bar to the military forces present in the Daraa and Quneitra de-escalation zones from moving from point to point, under the protection of the Russian military monitors.
An anonymous US State Department official said Sunday, Nov. 12, that Russia had agreed “to work with the Syrian regime to remove Iranian-backed forces a defined distance from the Golan Heights frontier with Israel.” In the official’s view, if Russia agrees to removing Iranian and Hizballah forces from the Israeli and Jordanian borders, that will be a sign “we are moving in the right direction.”
This hope suggested that Washington too was not exactly sure that the Russians would stand by every iota of the deal. Moscow has not reacted to the American official’s comments, which sounded like an attempt to make the Trump-Putin memorandum easier for Israel to swallow, and may well take exception to it.
Jordan welcomed the “important achievement” – and with good reason. The US and Russia agreed to expand the joint coordination command center they are running out of Amman, and for Jordan this is tantamount to a guarantee for its security. Israel only has a bilateral military coordination apparatus with the Russian command in Syria, under which it retains freedom of action against Iranian and Hizballah forces in Syria, which is limited to three spheres:

Israel’s Minister of Regional Cooperation, Tzahi Hanegbi, who often speaks for Binyamin Netanyahu on foreign affairs, commented Sunday that the new memorandum “does not meet Israel’s unequivocal demand to rule out developments that bring the forces of Hizballah or Iran to the Israeli-Syrian border.”
This statement is irrelevant in light of the Trump administration’s tacit consent for Iranian and Hizballah forces to take up a presence and move freely near the Israeli border. Our military sources report that, at this moment,  elements of Iranian and Hizballah command posts – although not troops – have set up shop opposite the Israeli Golan at distances of 4km to 15km from the border, with no sign of preparations to pull up stakes and move out.