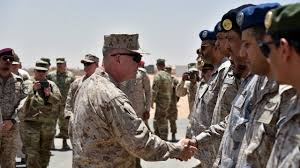 The US military has marked out the western coast of Saudi Arabia for use of the Red Sea port of Yanbu and two airfields – the King Faisal Air Base at Tabuk and the King Fahd Air Base at Taif. This was reported by the US military to reporters during a visit to Yanbu on Monday, Jan. 25 by U.S. Marine Gen. Frank McKenzie, the head of US Central Command

Stressing the principle of “flexible” responses, McKenzie said that the Persian Gulf “would be contested waters under any scenario of armed conflict with Iran, so you look at the places where you would move your forces as they enter the theater from being in a contested area,” The general explained to reporters. “These are prudent military planning measures that allow for temporary or conditional access of facilities in the event of a contingency and are not provocative in any way, nor are they an expansion of the US footprint in the region, in general, or in the kingdom of Saudi Arabia, in particular.

In a new thrust last month, Tehran’s military language was less nuanced. In mid-December, during the US presidential transition, the Iranian navy posted its largest warship Makran, a logistics vessel which carries 7 helicopters, and the missile carrier Zereh to the Bab-el-Mandeb Strait chokehold point of the Red Sea. “We are once again in the Red Sea region,” said its navy chief Maj. Gen. Mohammad Hossein Bagher.

On Saturday, Riyadh came under a mysterious air attack, which the US State Department of the new Biden administration condemned as “an attempt to target civilians.” It remains unclear if it was a missile or a drone used in the attack. Riyadh came under attack again from northern Yemen on Tuesday.

The western coast of Saudi Arabia provides US facilities in western Saudi Arabia with additional distance from Iran and its ballistic missiles – on the one hand. But on the other, advanced Iranian Shahed-136 “suicide drones” have been deployed to Houthi-controlled northern Yemen. They are estimated to have an effective range of 2,000 to 2,200 km. Israel, Saudi Arabia and US bases are well within range.

Iran’s Yemeni clients have also been supplied with explosive boats and mines, posing a lurking menace to Red Sea shipping in this important international sea lane.

President Joe Biden has evidently taken stock of US stakes in the combustible region around Iran and as new commander in chief has lost no time in setting military counter-steps in motion. Washington is demonstrating its readiness to handle any Tehran moves to test the new president’s resolve, while the military is showing the flag ahead of the nuclear talks which both the US and Iran are getting set for.