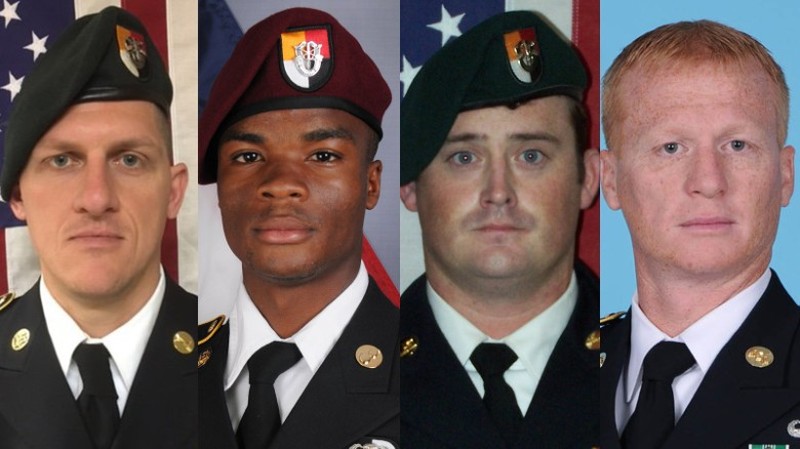 If the deaths of four US Special Forces troops on an anti-terror mission in Niger in early October have become not just politically controversial, but also a mystery, it is because even the Chairman of the Joint US Chiefs of Staff, Gen. Joseph Dunford is as perplexed as everyone else about how it went amiss

What exactly were Sgt. La David Johnson and three other Green Berets doing when they were ambushed on the Niger border with Mali? Gen. Dunford, who on Oct. 23 tried to trace a timeline of the events leading up to their deaths, admitted he had “only limited information” about what actually happened.

On Oct. 4, the US commandoes were heading back to their forward operating base in Niger from a reconnaissance mission – or was it a patrol, or a training mission with Nigerean troops? – near Niger’s border with Mali. Dunford said that 50 Islamic State fighters ambushed them. However, even their identity is a guess. US Africa Command (AFRICOM) officials have said it is “inappropriate” to speculate about the incident and those who attacked the US forces.

The soldiers did not call for air support for the first hour, according to one version; according to another, the French fighter aircraft took too long to reach the scene, and by then, it was too late to save the men and the attackers had disappeared.

The incident has provided political fodder for the Trump administration’s enemies, ranging from the way President Donald Trump spoke to the widow of one of the soldiers who died in the operation, to an attempt to liken the episode to the totally dissimilar Benghazi affair, which turned on the murder of US Ambassador Chris Stevens and three other Americans by terrorists in this Libyan town on Sept. 11, 2012. President Barack Obama and the Secretary of State the, Hillary Clinton, were blamed for failing to provide the diplomats with protection and then lying about the perpetrators.

The campaign to twist the Niger episode around in order to blame Trump has thrown mud over efforts to explore the real state of the war on terror in this remote part of Africa.

On Oct. 30, the UN Security Council discussed the nature and extent of UN support for the new French-backed Group of Five Sahel Joint Force – the G5-Sahel. The Council stopped short of offering a mandate, only calling for “multilateral and bilateral assistance,” because it was unable to overcome an impassable obstacle.

The two nations, who ought to have contributed the bulk of the military forces for fighting the scourge of Islamist terror, Morocco and Algeria, stand in the way of the effort.

Morocco welcomed the French initiative, viewing it as a step against Algeria’s claims to the Sahel, and offered the G5-Sahel Joint Force military training and border security. Algeria declined, feeling sidelined by France for an important regional security role. France trusts neither of those North African players, suspecting Algeria of playing with terrorists groups and Morocco of trafficking in drugs and the flow of migrants.

In the current climate of political instability, ethnic grievances, extreme poverty and the advancing desertification of the region, terrorists and insurgencies flourish, spilling across the crumbling borders dividing the Sahel and North and Central Africa. Al Qaeda in the Maghreb (AQIM) is king in Mali, challenged by ISIS, whereas Boko Haram has sunk its claws into Nigeria and Chad. They bankroll their heinous operations with trafficking in arms, people and drugs.

The lack of regional cooperation allows these groups to outgun national armies and run circles around the inadequate international forces trying to fight them.

The US Africa Command mostly provides badly needed logistical, intelligence and security coordination to the African-led Multinational Joint Task Force fighting Boko Haram in the Lake Chad basis. This force is made up of 5,000 troops from Niger, Chad, Nigeria, Benin, Burkina Faso, Mauritania and Cameroon. The American Special Forces commanders operating there face impossible challenges day by day from violent intruders, terrorists and transcontinental crime, which feeds on every form of human misery, including the despairing migrants.

On Monday, The United States pledged up to $60 million to support the Group of Five Sahel States (G5 Sahel) Joint Force’s counter-terrorism efforts.

Although the US maintains hundreds of troops and many bases across Africa, as well as forward operating positions across the Sahel, the commanders on the spot are constantly at a loss in the face of situations that defy solutions or even understanding.