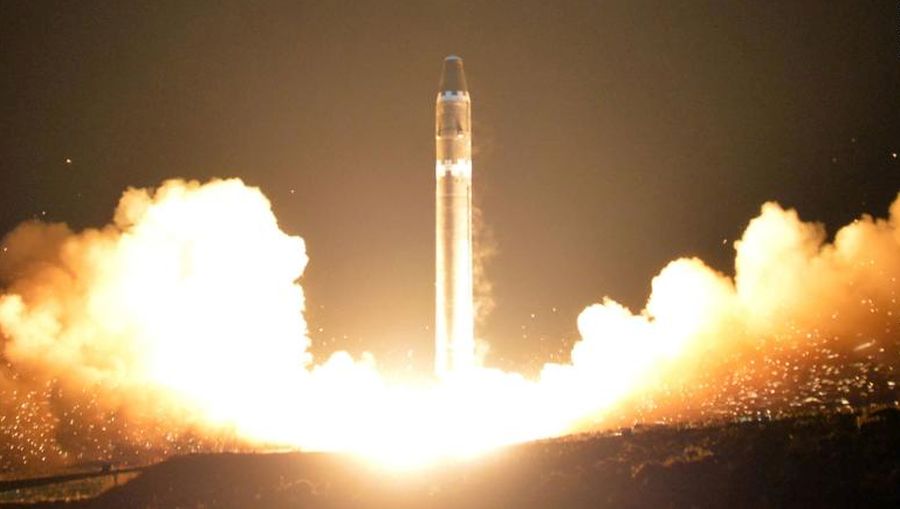 The Hwasong-15 tested on Wednesday, Nov. 29, likely carried a dummy warhead equivalent in weight to a nuclear bomb, say US missile experts.

What this means is that North Korea had not just attained world-power ability to build an intercontinental ballistic missile, but had also most likely mastered the technology of trajectory re-entry to any point on earth it wished to target. Experts examining the photos released by Pyongyang Thursday found the just-launched missile to be much broader and bigger than the earlier Hwasong-14 model. It has multi-stage rockets, each containing its own engine and propellant for greater thrust and range. The experts were most impressed by what appeared to be “gimbaled engines” – meaning that the exhaust nozzles of the engines can be used for navigation while holding the missile in stable trajectory. These capabilities plus the ability to launch missiles by night from mobile launchers has put North Korea in the exclusive club of world powers in this field.
America’s UN ambassador Nikki Haley Wednesday night warned against “further acts of aggression like the latest launch,” adding, “Make no mistake, the North Korean regime will be utterly destroyed.”

No rhetoric can obscure North Korea’s breakthrough or Kim Jong-un’s success in blindsiding the intelligence services of the United States, Japan and South Korea. None of their surveillance agencies had caught on to the Pyongyang’s newfound capabilities and were caught napping by the timing of the Hwasong-15 launch. Some hard thinking is called for by American policy-makers and strategists on US intelligence capabilities following this eye-opener. It would also be interesting to find out if Chinese and Russian intelligence agencies had done better.

But, meanwhile, the time is long past for appeals, like the one President Donald Trump addressed once again to his Chinese counterpart, Xi Jinping to use “all available levers” to convince Kim Jong un to give up his “provocations.” Such appeals only serve to highlight American ineffectiveness in the face of those provocations and encourage rogue regimes like that of Iran to take advantage and follow suit. The Trump administration must come up fast with a way of dealing with Pyongyang – somewhere between smashing the Kim regime and the policy of swinging between sanctions and diplomacy, whose inefficacy was devastatingly proven now after 25 years of failure.