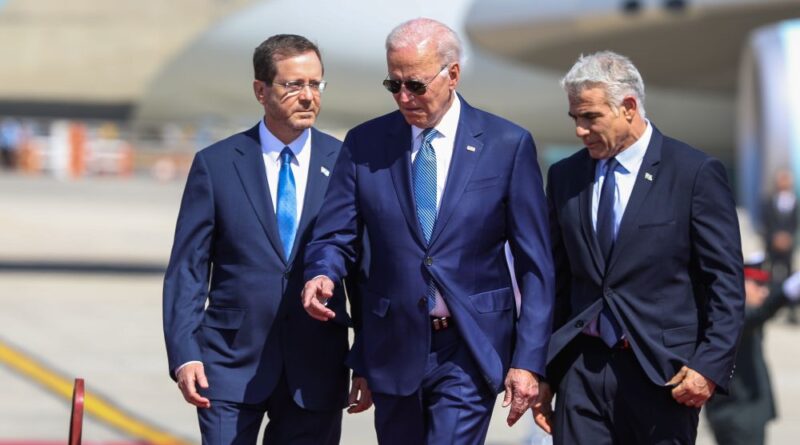 President Joe Biden on landing in Israel on Wednesday, July 13, carefully avoided mentioning Iran in his opening remarks. While stressing that the connection between the Israeli people and the American people “is bone deep,” he also omitted reference to a regional air defense pact he was widely expected to launch.

Neither had a word to say about furthering Saudi-Israel ties, a subject upon which thousands of op-ed column words had poured out ahead of the visit. All he said was that he would work hard during his trip “to advance Israel’s integration in the region more broadly.” He cited in this regard the virtual meeting he plans to hold with the leaders of Israel, India and the UAE — a new forum called the I2U2, to deepen economic cooperation between the Middle East and the Indopacific.

While Prime Minister Yair Lapid and President Isaac Herzog both said in their welcoming remarks that countering Iran’s nuclear program was a top priority, opposition leader former prime minister Binyamin Netanyahu offered the only firm voice on the subject. He said sanctions would not deter Iran from developing a nuclear weapon without a credible military threat. And if Iran was not deterred by such threats, then they must be put into action.
In contrast to other issues, Joe Biden was clear in emphasizing his support for the two-state solution to the Israeli-Palestinian conflict “even though it’s not [feasible] in the near term.” His national security adviser Jake Sullivan told reporters aboard Air Force One that the president was not bringing with him any formal new peace initiatives but would try and encourage a policy that paved the path to peace with the Palestinians and the region as a whole.

Turning to bilateral relations, Biden said: “We’re going to deepen our connections in science and innovation and work to address new global challenges through the new Strategic Dialogue on Technology,” that was announced on Wednesday in Washington and Jerusalem. The two national security advisers will lead the dialogue and focus on ways that AI and other cutting-edge technology can contribute to a range of global issues, including climate change and preparedness for pandemics.

After landing at the airport, the president visited the Defense Ministry’s site for a  viewing of Israel’s multi-tier air defense systems, including the Arrow, David’s Sling, Iron Dome, and the still developing high-powered Iron Beam laser interception system. After a classified briefing from Defense Minister Benny Gantz and other security officials, including IDF Chief of Staff Aviv Kohavi, he said: “May Israel and the US continue to grow and prosper together for the benefit of the entire world.”

Sullivan noted that the administration has not given up on the reopening of a US consulate in East Jerusalem although the Bennett-led government managed to get it delayed.

He noted that the president was keen to emphasize that US-Israel relations were not tied to whoever sat in any of the top seats in Israel. Indeed, his unwavering friendship with Israel and support go way back. On his 10th trip to the Holy Land, he can look back on visits as a senator and vice president spanning almost five decades and nearly a dozen prime ministers. This time, he finds Israel politically unsettled, welcomed by caretaker prime minister Lapid, who is strongly challenged by former PM Netanyahu, and a country preparing for four months of rough and tumble up to a November election. Biden will make sure not to favor any of the contenders.

Biden himself is challenged at home as 9.1pc inflation hits a 40-year record, the abortion controversy rages on and his popularity rating declines.

Nonetheless, “We have a full agenda over the next two days,” the visitor emphasized, “because the relationship covers every issue that matters to our mutual future.”