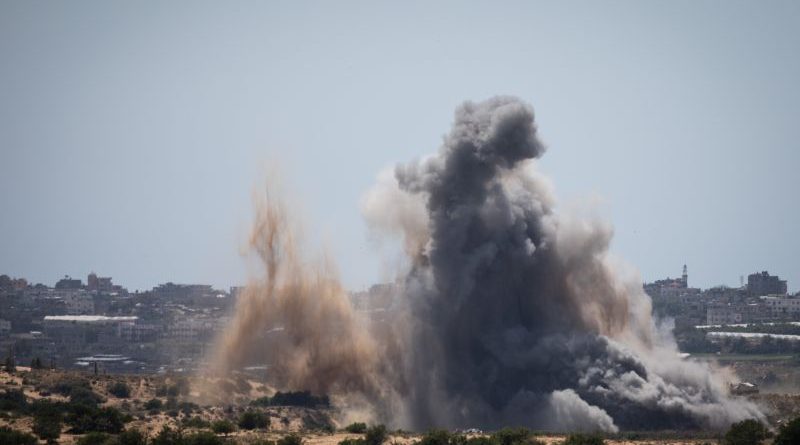 “Fighter jets, attack helicopters and tanks hit a number of Hamas targets in the Gaza Strip,” at dawn on Wednesday, Aug.12. The IDF named the targets as “underground infrastructure and Hamas observation posts.” During the day, massed arson balloon clusters loosed from the Gaza Strip set of 60 fires across Israeli farms and woodland. The military spokesman stressed that Israel “will not hold back on any action necessary for stemming assaults on its citizens and territory. Hamas is held fully responsible for such assaults and will bear the consequences.”

On Tuesday, firefighters, backed by soldiers and volunteers, raced between dozens of fires set off by Palestinian arson balloons from Gaza. Blackened wheatfields and scorched trees were all that remained of thousands of dunams of fertile land adjoining the Gaza Strip. This was the sixth and most destructive day of the cynical campaign devised by Palestinian terrorists for using bright-colored toy balloons to sow desolation. The firefighting teams toiled ceaselessly in the sweltering summer heat to keep the flames from reaching populated areas. No one was hurt.

This year’s Palestinian balloons are causing even more damage than they did in their first appearance in 2018. On Tuesday, they focused mainly on the Kisufim and Beeri environs in the Eshkol council bordering on the Gaza Strip.  A Bedouin family of shepherds was evacuated from its encampment near Kissufim. Wild creatures fled from the burning Beeri nature reserve although many, including nesting birds, failed to escape the flames and were incinerated. Incendiary balloons exploded over the town of Sderot and Hof Ashkelon.
Prime Minister Binyamin Netanyahu and Defense Minister Benny Gantz both warned that the perpetrators of balloon terror would not escape harsh punishment. Netanyahu added: “I want to make it clear to all of Iran’s proxies, including those in the Gaza Strip, that we have exacted a heavy price in the past and will do so now.”
The Hamas rulers of the Gaza Strip slammed Israel’s closure of the Kerem Shalom goods crossing into the enclave early Tuesday, accusing Israel of “belligerent” acts. “This is a crime against two million Palestinians. Israel will be held responsible for the consequences.” On Monday, the Palestinian group test-fired rockets over the Mediterranean Sea, announcing that the next rockets would be aimed at Israel.

Its leaders have indicated that the escalation of terrorist violence against Israel is their means of pressuring Qatar to continue its regular cash gifts to the Gaza Strip, after its year-long program winds down next month.

Amid the flames and the smoke, a new neighborhood was inaugurated at Kibbutz Sufa, the first in 33 years. It will accommodate 20 young families who have joined the kibbutz.