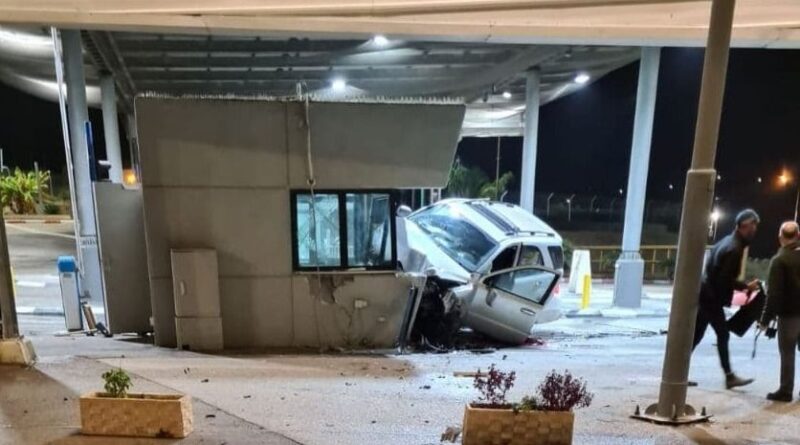 A security guard at the Tanim crossing outside Tulkarm in Samaria was seriously injured early Monday, Dec. 6, when he was slammed by a car racing at a speed of 100kph from the Palestinian side of the crossing. A second guard shot the driver, Muhammad Mussa, a Palestinian aged 15 from Nablus. He was taken to hospital where he died of his wounds. The injured guard, 34, is in stable condition. The crossing has been shut down. The driver had no permit to enter Israel and obviously no driving license.

Defense Ministry Director General, Maj. Gen (res) Amir Eshel, visited the scene of the attack. After hearing what happened, he said: “They acted speedily, exactly as they are trained. They engaged the terrorist, hit back and terminated the incident in seconds.” He added: “There will be a full investigation as well as steps taken to provide the guards at the crossings with better protection.”

Defense Minister Benny Gantz ordered a comprehensive inquiry leading to practical conclusions. He placed all the border crossings in Judea and Samaria on high alert.

This was the second terrorist attack in 48 hours. On Saturday, a Palestinian teen stabbed and seriously hurt a young Orthodox seminarist at Damascus Gate in the Old City of Jerusalem. He was about to stab more victims when he was knocked down by border guards and shot dead. The officers face an inquiry under caution after being commended by their superiors and Prime Minister Naftali Bennett for acting fast to save lives.

MK Ram Ben-Barak, Chairman of the Knesset Foreign Affairs and Security Committee, commented: “We are in the throes of a wave of terror that can be controlled. Scores of major attacks are forestalled year by year, but lone wolf terror presents a special challenge.”