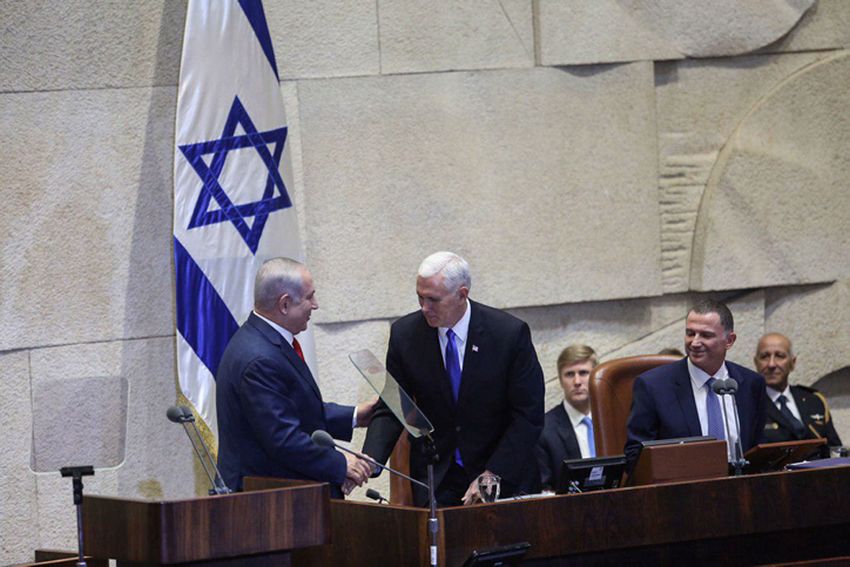 US Vice President Mike Pence also promised that the US embassy would move to Jerusalem “before the end of next year.” This and other important pledges that he delivered in his Knesset speech Monday were greeted with warm applause and standing ovations. He started by saying that he was the first US vice president to address the Knesset in Jerusalem, as the capital of Israel, and went on to explain that President Trump’s recognition of Jerusalem as Israel’s capital is in the “best interests of peace because it chooses fact over faction.” He stressed that Trump is fully committed to achieving a lasting peace between Israel and the Palestinians. If both sides agree, the US will support a two-state solution. The vice president noted that Israel has made difficult decisions to achieve peace with its neighbors and he strongly urged the Palestinian leadership “to return to the table, because peace can only come through dialogue.”
Pence pointed out that the president had called on all the parties “to maintain the status quo at the holy places, including Temple Mount or Haram al-Sharif, and was not prejudging the final solution, including boundaries.”

The speaker castigated the Iranian regime as “dangerous, dictatorial and brutal.” Last year Tehran spent more than $4bn on “malign activities in Syria, Lebanon and other countries in the region,” as well as pursuing a nuclear program and developing ballistic missiles. The 2015 nuclear deal, said Pence, “is a disaster.” Unless it is fixed, the US will withdraw from the deal immediately. “We will also no longer tolerate Iran’s support for terror.” In ties with Israel, he said, “US-Israel bonds have never been stronger, and their friendship never deeper,” and added: “The US will never compromise on its safety and security and will its guarantee for Israel’s ability to defend itself.”

Turning again to Jerusalem, he said the “miracle of Israel is an inspiration to the world.” Today, “Jews, Muslims and Christians, who claim Abraham as their forefather, are in constant contact with each other and their faiths come to life here. All who seek a brighter future should cast their eyes here.”
As he rose to speak, members of the Israeli Arab party tried to raise placards declaring in three languages “Jerusalem is the capital of Palestine.” Knesset police grabbed the placards and bundled the lawmakers out of the chamber.

The vice president dines with the prime minister later Monday. Before ending his visit Tuesday, he and his wife will visit Yad Vashem and pray at the Western Wall.

15 thoughts on “Pence: US will never let Iran acquire a nuclear weapon”