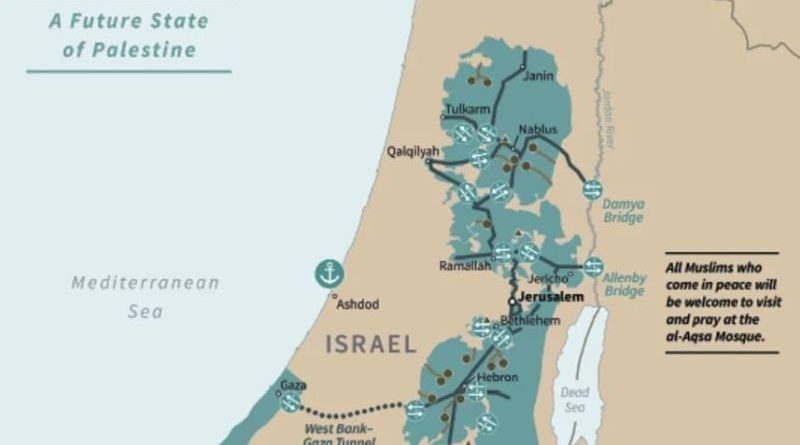 DEBKA Weekly has picked 20 of the main points covered in the 50-page political section of the Trump Plan for an Israel- Palestinian peace.

1. For the first time in the long history of failed Israel-Palestinian peace initiatives, the Trump plan – or vision – has reached an understanding with Israel on a map that sets forth the borders for a two-state solution of the Israel-Palestinian dispute.

2. Both Prime Minister Binyamin Netanyahu and opposition leader Benny Gantz agreed to the plan as a basis for negotiation.

3. As a result of proposed land swaps, mainly in the Israeli Negev, 97pc of Israelis in Judea and Samaria and an equal proportion of Palestinians will have contiguous territory. The Palestinians will end up with land equal to the pre-1967 area of the West Bank and double the area they control at present.

This part of the vision is projected to take place at the end of a four-year period, contingent on the outcome of direct negotiations between the two parties.

4. The lands Israel is to cede may be or may be not populated. The Triangle adjacent to the West Bank is studded with Israeli Arab towns and villages, whose inhabitants have often identified as “Palestinian.” The Triangle was to have come under Jordanian rule as part of the 1949 armistice agreements, but were held back by Israel out of security concerns. The Trump plan would redraw the border so as to attach the Triangle to the future Palestinian state. The inhabitants would become Palestinian citizens and have the option of staying where they live now or moving elsewhere. While under Palestinian civil rule, Israeli security responsibility would extend to this area.

6. Under this plan, Palestinian refugees will be given a choice to live within the future State of Palestine, integrate into their current host countries, or resettle in a third country.

7. The Palestinian state would be provided with a network of bridges, roads and tunnels with modern and efficient transportation links for free travel and the movement of goods through the future state including Gaza and the West Bank.

8. The landlocked Palestinian state will have the use and management of facilities at Israel’s Haifa and Ashdod ports,

9. The Jordan Valley including the northern shore of the Dead Sea, which are vital components of Israel’s security, will be annexed to Israel. Terms for Palestinian agricultural activity to continue in the Jordan Valley under Israel license will be negotiated.

10. The Gaza Strip will not benefit from improved living standards until it signs a ceasefire with Israel is fully demilitarized and the terrorist groups dismantled. The Palestinian Authority must be able to assure foreign investors that they are not at risk from outbreaks of violence. Israel will retain sovereignty over Gaza’s territorial waters as insurance tor maritime stability.

11. Two main roads under Israel’s security overview will link the Palestinian state to the Kingdom of Jordan.

12. The provisional security wall running between Israel and the West Bank will be knocked down and replaced with the barriers marking the frontiers between Palestine and Israel. Regular modern border crossings and terminals will be set up. During negotiations, the two parties will submit lists of their respective holy places and be assured of freedom of access and worship.

13. Israel has agreed to a four-year land freeze to secure the possibility of a two-state solution at the end of the process, after first annexing the 150 communities of Judea and Samaria in the immediate term.

14. Jerusalem: Repartitioning one of the most sensitive places on earth would be a huge mistake. Therefore, the city will remain undivided under Israel sovereignty as it is today, with the existing security barrier continuing to separate the Arab neighborhoods and marking the borderline between the two states.

15. The capital of the State of Palestine will be Al-Quds and include the East Jerusalem areas of Kafr Akeb, eastern Shoafat and Abu Dis outside the existing security barrier. The city’s Arab inhabitants remaining under Israel rule may choose between adopting Israeli or Palestinian citizenship or continuing to hold permanent residence permits and working in all parts of the city as they do today.

16. The Palestinian state will be demilitarized with Israel retaining security responsibility in all areas west of the Jordan River and deploying military forces. Their tasks will be to uphold local security, prevent terror attacks in the Palestinian state and across the borders in Israel, Jordan or Egypt and safeguard the ruling establishment and foreign diplomats.

17. The Trump plan will assess the Palestinian government’s willingness to live peacefully with Israel and effectively combat terror. If this is proven, the intention is to gradually hand over security responsibility to the Palestinian state under an arrangement that is reversible if it does not work out.

18. Given its narrow geographical contours, Israel is obliged to hold full control over all the air space west of the Jordan River in any future agreements. The IDF will also retain at least one early warning station on Palestinian territory, but also rely on drones, balloons and other devices, in an effort to reduce as far as possible its security footprint on Palestinian land.

19. Israel will keep its military presence at the frontier crossings with Jordan, Egypt and the Palestinian State discreet, by manning them with staff in civilian dress. A team of monitors, 3 Israelis, 3 Palestinians and an American, will review how this works in quarterly meetings.

20. Israel has laid down five pre-conditions for entering into this process:

a) The Palestinian Authority or some other national or international entity acceptable to Israel must assume full responsibility for the Gaza Strip.

b) Hamas, Islamic Jihad and all other terrorist organizations must be dismantled and disarmed.

c) The Gaza Strip will be fully demilitarized.

d) Repatriation of the remains of the two Israeli soldiers lost in battle and the civilians held hostage by Hamas.

e) Before being assigned any role in the future Palestinian government, Hamas must first pledge its commitment to the path of peace and adopt the Middle East Quartet’s resolutions, which stipulate recognition of Israel, commitment to ending violence and acceptance of former agreements, including the one for disbanding all armed terrorist organizations. The US expects the future Palestinian government to meet these conditions before opening its ranks to these groups.