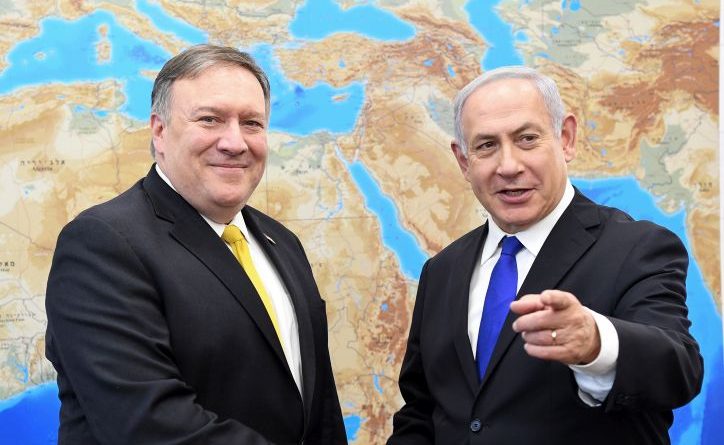 US Secretary of State Mike Pompeo is to pay a short visit to Israel on May 13, ending a pause in his international travels due to coronavirus. He will meet both Prime Minister Binyamin Netanyahu, an old friend, and Benny Gantz, the new “alternative prime minister,” on the day that the pair take office as joint heads of a unity national government. The visit is clearly a gesture of US support. The first high-ranking foreign official to visit Israel since the outbreak of coronavirus will, like his hosts, will first be tested for the virus, wear masked and curb friendly gestures.

Pompeo is widely expected to talk about reactivating US President Donald Trump’s Middle East peace plan, Iran’s “malign actions” in the region and cooperation in fighting the covid-19 pandemic. While doing so, he will undoubtedly take a first, curious look at the new Israel lineup, say DEBKAfile’s sources, and report back to the White House on his impressions. For the first time in years, a Netanyahu-led cabinet will not be composed exclusively of right wing and religious ministers; some like Gantz, are centrists or left-of-center like certain members of his party and a couple of Labor members.

The visitor will no doubt try and find out whether Netanyahu intends to go through with announcing the annexation of areas of Judea, Samaria and Jordan Valley as soon as July 1 as allowed under the Trump peace plan and the coalition deal with Gantz. The peace plan also offers the Palestinians an independent although demilitarized state, which has raised objections to Netanyahu’s compliance in nationalist circles to the right of the new government.

The coalition deal stipulates that Israel must take into account regional stability and existing peace agreements when going forward with annexation. Egypt and Jordan, the only two Arab nations to have signed peace accords with Israel, have voiced strong objections to the step along with other Arab leaders. Both have developed important security interdependence with Israel and may be content with strong rhetoric.
The Palestinian Authority Chairman Mahmoud Abbas will not. He has Put before the PLO executive a radical plan. He wants support for his decision to dissolve the dissolve the Palestinian Authority if the Netanyahu-Gantz government annexes one inch of the West Bank. By breaking up the PA, Abbas intends to saddle Israel with the administration and care for all civic needs of two million Palestinian denizens of the territory – health, water, economy, jobs etc.

It is up to Netanyahu to decide whether to go for what many of his supporters see as a one-time opportunity for establishing Israeli sovereignty in the heartland of Jewish history, or decide that the international fallout is too high a price to pay and wait for another chance.