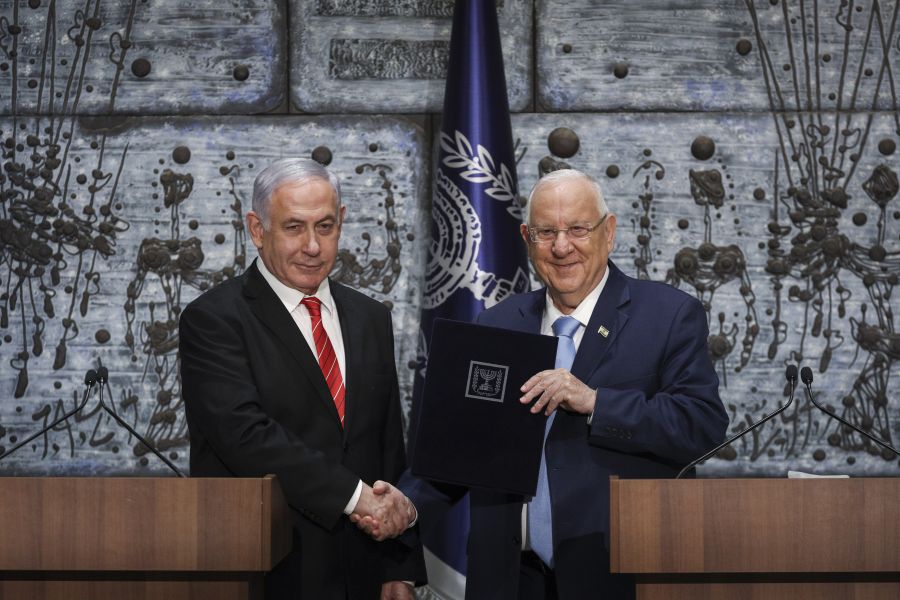 President Reuven Rivlin reluctantly handed incumbent PM Binyamin Netanyahu the mandate to form a post-election government on Wednesday, Sept. 25, after he failed to obtain the joint consent of Netanyahu and Kachol Lavan’s Benny Gantz to rule together at the head of a national unity government.  In accepting the mandate, Netanyahu pledged every possible effort to achieve a unity government as the only logical outcome for avoiding the absurd option of a third national election in less than a year. He stressed that Israel was in dire need of a broadly-based national government to confront the colossal threat to national security posed by Iran.
The prime minister has 21 days to come up with a majority cabinet representing 61 Knesset seats, with a possible extension of 14 days. Since he cannot muster more than 55, the president may then choose another premiership candidate for the task. If none is available – Kachol Lavon can count on fewer supporters – the mandate is relegated to the Knesset which is competent to select a third candidate or dissolve itself.
This last eventuality begins to loom after the two leading parties, Likud and Kachol Lavon, came out of the Sept. 17 election without a majority and have so far been unable to reach past their respective baggage for a unity deal. Kachol Lavan accuses Likud of packing its traditional right-wing and ultra-religious allies into an immovable bloc of 55 lawmakers, while Likud’s religious allies and Kachol Lavon’s No. 2 Yair Lapid are locked in their mutual refusal to coexist.

The president revealed that as a compromise formula he had proposed that the Knesset enact a basic law creating the position of Vice Prime Minister. The holder of this post would automatically take over if the premier was unable to function – or, as in the present case, under a potential agreement for rotating the premiership in mid-term between the Likud and Kachol Lavan leaders.
After the president’s initial push for a negotiated deal between the two parties failed, three options remain:
1. More unity attempts are to be expected on the understanding that the a third election may not break the current political deadlock any more than did the second.

3. A third election in three years which would lay Israel’s entire democratic and political system open to permanent stalemate. Given the current gap between the two political camps, the chances of electoral reform are practically non-existent.