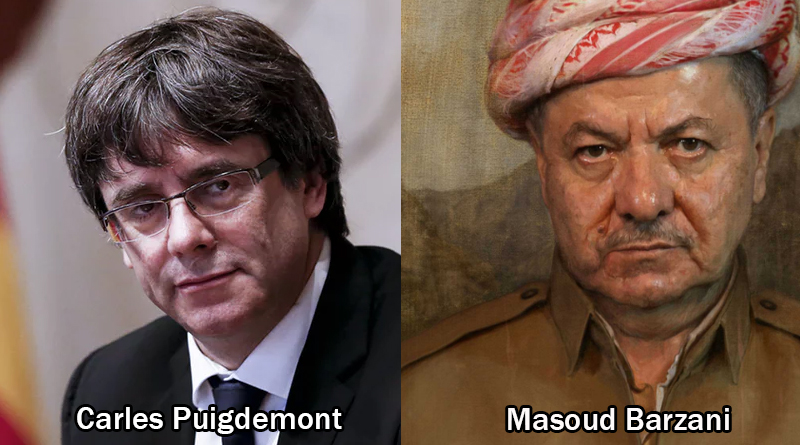 Catalan President Carles Puigdemont decided Tuesday, Oct. 10, like Iraq’s Kurdistan leader Masoud Barzani before him, to put his people’s independence vote on hold for negotiations.
In a tensely awaited speech, the Catalan president refrained from proclaiming the autonomous province’s independence forthwith. Instead, he said that, while he has a mandate for independence, he proposes a few weeks delay to facilitate dialogue with Spain, although the Spanish government has shown a “radical refusal to negotiate.”
This shifted the weight of international pressure from the Catalan separatists to the Spanish government to accept reasonable terms.
Masoud Barzani, president of the semiautonomous KRG, said likewise that after his people voted for independence, he would hold talks with the Baghdad government to “ensure the rights of the Kurdish region,” before announcing Kurdistan’s secession from Iraq,

The European Union and its members leaned hard on Puigdemont to hold back from separation, warning that Catalonia would be expelled from the bloc and its shared currency, the euro, if it declared independence. To get back in, it would have to re-apply — a lengthy and uncertain process.
Moreover, he could not ignore the hundreds of thousands of people who demonstrated in Barcelona over the weekend against independence, waving red-yellow Spanish flags through the city center.

Spanish Prime Minister Mariano Rajoy had vowed that Spain will not be divided and promised to use any lawful measure to stop Catalonia’s secession. Losing Catalonia, which has its own language and culture, would deprive Spain of a fifth of its economic output and more than a quarter of exports.

Catalonia’s situation is analogous to the Kurds in the sense that both hold economic clout. Losing Catalonia would deprive Spain of a fifth of its economic output and more than a quarter of exports.

The KRG already controls the oil fields of northern Iraq, and Kirkuk their center, joined the Kurdish independence referendum.

However, their relative situations were otherwise quite different, in that the Iraqi prime minister, rather than the Kurds, faced heavy pressure from Iran to prevent the Kurdish vote. At one point, Tehran threatened military action against the Kurds, if their referendum went forward, while on the quiet working for calm and dialogue

The Kurdish dialogue with the Iraqi federal government is due to begin in Baghdad within a few days.

The two separatist leaders in Barcelona and Irbil reached the same conclusion: Whatever the justice of their case, it is almost impossible in the year 2017 to achieve independence and change national borders without the backing of a broad international consensus.