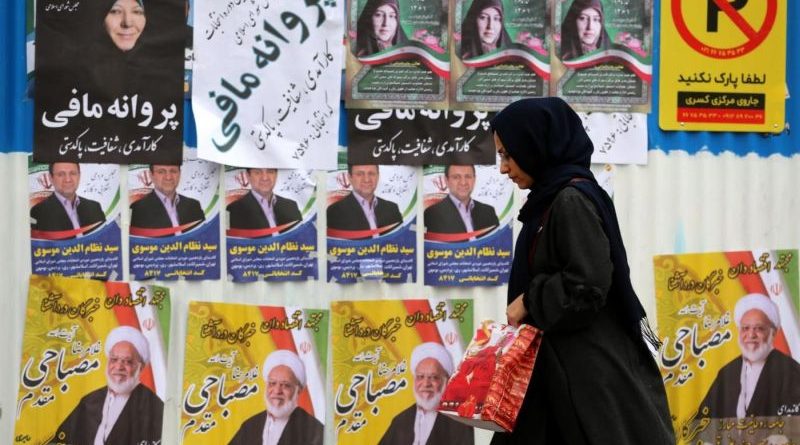 Ahead of Iran’s elections to parliament (the Majlis) on Friday, Feb. 21, more than 9,000 contenders for the 290 seats were disqualified by the powerful Guardian Council, most of them reformists, and some 7,000 approved. This culling process, taking place under the iron fist of supreme leader Ayatollah Ali Khamenei, made sure to cut the reformist camp out of its standing in the Majils; and distanced incoming parliament farther than ever before from reflecting the will of the people.

The Guardian Council vehemently denied slashing the list on political grounds, claiming that most of the barred candidates had financial corruption charges pending against them.

President Hassan Rouhani’s son-in-law Kambiz Mehdizadeh was on the list of disqualified candidates on the grounds of nepotism. The president mocked the Council’s vetting procedure as a charade and has tried to enact a bill calling for a referendum to limit the Council’s infallible authority.

Iran’s moderates face greater odds than ever before. Short of candidates for running in Friday’s election, 80 filed complaints with the Guardian Council to challenge its dictates. However, the reformists have not managed to hammer out a consolidated strategy. Some leading figures like Mohammad Reza Aref, leader of the Hope faction of parliament, opted out of running for re-election. The Supreme Council of Reformist Policy Makers (a coalition of at least 10 factions) declined to submit any list at all.

Other prominent reformists did insist on participating in the vote, including Golamhossein Karbaschi, a former Mayor of Tehran and leader of the Executives of Construction faction, Elias Harzati, head of the National Confidence faction, and Davood Mohammadi, leader of the Islamic Society of Teachers.

Then, too, populist reform factions have begun to emerge, including the Sacrifices Association led by Javad Imam, women’s groups and professional groups, such as the Medical Science Association and the University Professors Association.

Iran’s unique political makeup has even thrown up moderates posing as intermediaries who seek to build ties with the hardliners. Among them are the Popular Rules leader Mostafa Kavakebian and the Labor House leader Alireza Mahjoub. They rally around such figures as Majid Absari, a deputy for parliamentary affairs who served President Rouhani, but is also a former member of the Expediency Council which is dominated by hardliners.

Many frustrated reformists, after being marginalized in the current election, believe that their only hope of surviving the regime’s purges depends on how quickly they step outside party frameworks and join forces with the people to create an extra-parliamentary movement for change.