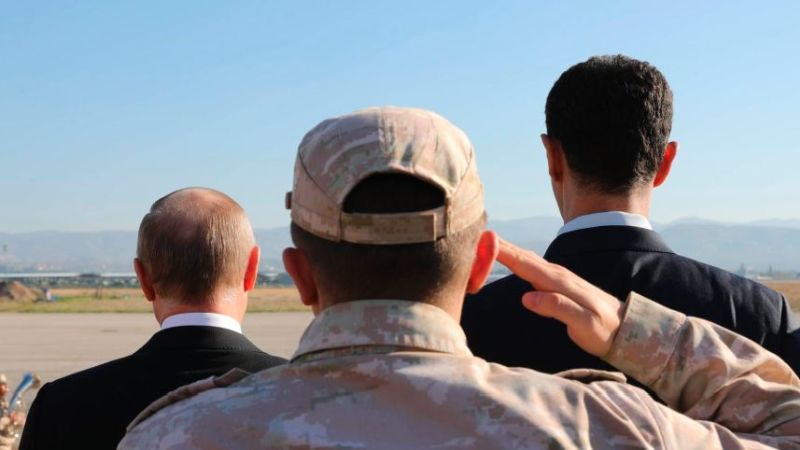 Two groups were waiting to greet Russian President Vladimir Putin when his plane landed at the Hmeimim Air base in Syria on Monday, Dec. 11: One consisted of the generals and colonels commanding Russian forces in Syria and the other, Syrian President Bashar Assad and his retinue.

As Putin stepped off the plane, Col. Gen. Sergey Surovikin, commander of Russian forces in Syria, took him by the arm and led him to meet the Russian officers. Assad, who moved forward to greet him, found his way barred by Gen. Surovikin, who told him to wait until Putin had finished talking to his generals. It was only then that the Syria president was allowed to greet the arrival.

This was the general’s way of telling Assad that he now stood on Russian territory. For Putin, the Syrian president was the foreign guest at Hmeimim Air Base – not the Russian president.

In his comments at the air base, Putin repeated a statement he made on Dec. 6, when he declared “complete victory” over the Islamic State on both banks of the Euphrates River in Syria. The military operation was therefore finished, he said, and the focus would switch to a political process for leading Syria to eventual presidential and parliamentary elections.

However, just three hours after he departed Syria for Egypt, Islamic State forces launched a surprise offensive. They crossed the Euphrates and struck the Syrian army and its allies emplaced north of Abu Kamal. Armed with the element of surprise, the jihadist strike force came close to overrunning Syrian government positions on the western bank of the river. There could be no stronger evidence that the war was far from over, say DEBKA Weekly’s military sources, than the ISIS force’s ability to cross the river from east to west at a point 1-1.5km wide and catching Assad’s army and its allies napping.

Like Putin, US officials are also wont to stress that ISIS is virtually finished, having lost most of the land the caliphate captured three years ago but never completely held or ruled. But this does not mean that ISIS is a goner as a fighting machine, say our military sources. The Syrian government army is in a sorry state after nearly seven years of civil war, while ISIS comes out fighting from four years of combat and one defeat after another.

Assad’s army is therefore in no shape to administer the coup to grace to its first enemy, the Syrian rebel movement. Most rebel militias have indeed given up and disbanded. But the Assad regime lacks the manpower resources for holding onto recovered lands, and leaving large tracts without a military presence tempts insurgent elements to regroup and move in.

This poses President Putin marooned between two hard choices. Should he continue to invest heavily in navigating Syria towards a safe political resolution, especially when the Astana peace process which he fathered has clearly run its course with little promise to offer for Syria’s political future? The parallel Geneva conference sponsored by the US and UN is no more viable than Astana. Or should he count his winnings from the Syria war – permanent air and sea bases in Latakia and Tartus, kept safe by de-escalations zones – and retire from the game?

Putin will no doubt be swayed by another disappointment he recently took on board. His bid to form a triumvirate over Assad’s head for taking over the reins of Syria’s transition into the future, turned out to be a non-starter. The two war allies, Presidents Hassan Rouhani of Iran and Tayyip Erdogan of Turkey, whom he summoned to Sochi in the third week of November, were consumed by their own interests. Neither was concerned about the stability of the Assad regime in Damascus. Iran had procured its coveted open corridor to Beirut and Hizballah and is now going full tilt at establishing military proxies on Israel’s borders. And in Ankara, Putin ran up against the same difficulty as US Presidents Barack Obama and Donald Trump; Erdogan is an unreliable and weak ally. Totally immersed in his power games at home, he is dragging his country down economically and militarily.

For all these reasons, Putin’s surprise trip to Syria failed to polish Russia’s image as the shining victor of the Syria war. Just the reverse; it exposed the Kremlin’s current stance on Syria as riddled with uncertainty and groping for the right way to proceed next.