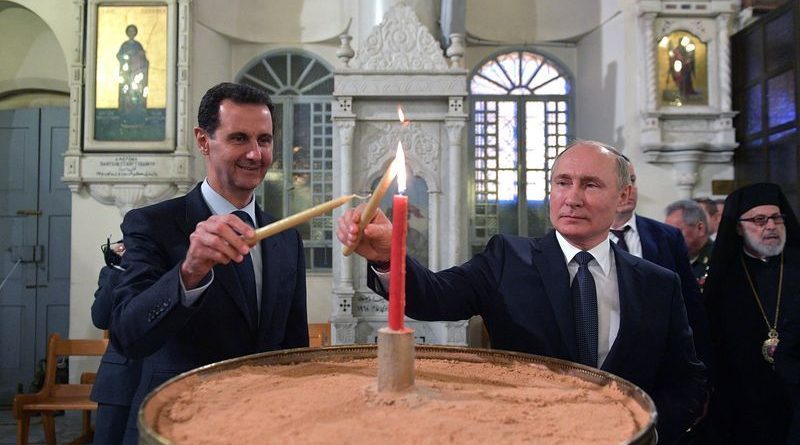 Russian President Vladimir Putin hurried over to Damascus on Tuesday, Jan. 7, after conducting a fast appraisal of the potential fallout for Russian interests of the military clash between Iran and the United States over the killing of Al Qods chief Qassem Soleimani. This event brought Syria’s position and Moscow’s interests there into new, fluctuating focus. Putin moved fast to hold Syria’s president Bashar Assad back from stepping out of his assigned role and bringing Moscow’s carefully crafted Syrian strategy crashing down. Hence, his rare trip to Damascus, only his second in the six years since the start of Russia’s military intervention in the Syrian conflict.

To remind Assad of the debt for his survival he owed to Russia’s armed forces, DEBKA Weekly’s intelligence sources report Putin ordered the Syrian ruler to meet him at Russian military headquarters in Damascus.

The irony is that the Russians, from being king of the Syrian arena since 2015, are suddenly pushed to the sidelines, with no say in the US-Iran flareup – even though it threatens to infringe on Moscow’s vital interests.

The “13 optional retaliation scenarios – each a historical nightmare for the US” that Iran’s security chief Ali Shamkhani posted on Monday, Jan. 6, pointed to a spillover of Iran’s vengeance into Syria. Tehran would obviously not think twice before enlisting the Iraqi Shiite militia units maintained there to bludgeon US troops in northeastern Syria.

This would put the Russian army in an impossible position.

Taking up a neutral-passive posture to avoid messing with the Americans would jeopardize Russian-Iranian cooperation in Syria and other parts of the region. And if the Russian commanders chose to step in, on whose side would they act? Would it be worth Moscow’s while to go head-on against the US to preserve its stake in Syria?

The Russian leader has since entering Syria trod a slender line. He has stood by his deal with Barack Obama to respect the River Euphrates as the dividing line between their sectors of influence – west for the Russians; east for the Americans – regardless of his commitments to Syrian and Iranian interests.

The same delicate calculus governed his decision to turn a blind eye to Israel’s campaign against Iranian military targets in Syria, while at the same time preserving Russia’s dominance in Damascus by bolstering the Assad regime’s war on rebel forces with arms deliveries and air strikes.

That line may snap if the Iran-US military confrontation crosses the border from Iraq into Syria. Assad is the weakest section. Putin came to Damascus to make sure that the Syrian ruler would not land any unwelcome surprises on his head by switching to active support for Iran’s Shiite proxies if – or when – they are ordered by Tehran to go for US forces in Syria.

The Russian leader must pin Assad down since his breakout in support of Tehran against the US would shake the entire Middle East edifice Putin has carefully constructed around Moscow’s strong stake in Syria.

Putin demanded a firm assurance from the Syrian ruler on this score before he travels to Israel in two weeks. That visit, too, was originally arranged to fit in with Moscow’s stable position in Syria and one of its anchors, the Russian leader’s unwritten accord with Prime Minister Binyamin Netanyahu.

That accord stipulated Russian non-interference in Israel’s operations against Iran’s military footholds in Syria, so long as they did not harm the Assad regime. That accord too is in jeopardy in the aftermath of Iran’s campaign of revenge for the Soleimani killing in next door Iraq. If Assad is pulled in by Tehran to fight Americans – in defiance of Moscow – Israel, as America’s leading ally in the region, would be forced to revoke the immunity promised the Assad regime as part of its deal with Moscow. This too would oblige Putin to rethink his Syria posture.

Assad’s own position is also in a state of flux. If he declines to stand by Iran at this juncture, he can forget about Tehran and its Shiite allies, especially the Lebanese Hizballah, continuing to come to his aid.

Putin therefore insisted on extracting clear answers from Bashar Assad on where he stood in the event of Iran’s fight with US crossing into his country, to save Moscow and Russian forces from being caught by unpleasant surprises. (See the next article on Israel’s changing policy.)

The content and outcome of Putin’s talks with Assad are not yet available. We expect to present a full report in our next week’s issue. It will likely encompass a detailed plan of action drawn up by the Russian leader, as is his wont before important interviews. Assad will be given exact instructions on what Moscow expects of him.