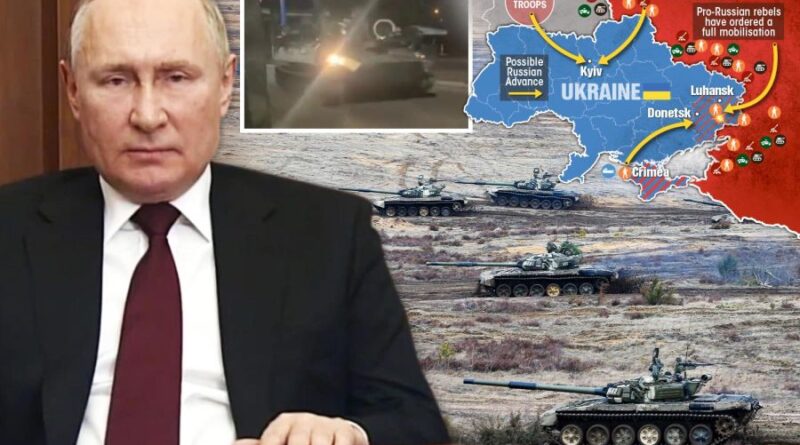 The US clamped sanctions on the Donetsk and Lugansk republics of Ukraine Tuesday night, Feb. 22 after Moscow recognized their independence. The US embassy relocated from Ukraine to Poland. President Vladimir Putin in a speech to the nation, declaring that Ukraine was not a real state but an integral part of Russian culture and history, denounced it as an “American colony” with a “puppet government.”

A Russian “peacekeeping force” was thereupon deployed to the two republics. Shortly after midnight, columns of Russian armored vehicles had already been seen by reporters in Donetsk, traveling north and west.

The deployment of what Russia called a peacekeeping operation in eastern Ukraine is “nonsense” and Moscow’s recognition of breakaway regions as independent is part of its pretext for war and a threat to every UN member state, the United States told a hastily convened UN Security Council early Tuesday.

The Israeli embassy relocated overnight from Kyiv the capital to Lvov in the west. Consular services were operating along with an urgent call on all Israelis to quit Ukraine without delay. A diplomatic official said three Ukrainian flights were scheduled to leave for Israel. Arrangements had been made with the governments of neighboring countries to receive Israeli evacuees and the roads out of Ukraine were still clear.

Putin’s decision came after he led a lengthy, televised meeting on Monday afternoon of the Russian Security Council. He warned that Kyiv might try to retake Crimea by military force. The head of Russia’s Federal Security Service, Alexander Bortnikov, claimed saboteurs had been thwarted trying to carry out attacks in the occupied areas.

Western and Ukrainian leaders have dismissed such Russian allegations as baseless.

“With the appearance of weapons of mass destruction in Ukraine, the situation in the world, in Europe, especially for us, for Russia, will change in the most radical way,” Putin said, insisting that Ukraine, which surrendered its nuclear arsenal in 1994, once again wants to become a nuclear power. “We cannot fail to react to this real danger.” He added: “When the level of threat for our country is becoming greater and greater, Russia has every right to take countermeasures to enhance our own security. And that’s how we plan to act.”

Western leaders denounced Putin’s move as a violation of international law and Ukrainian sovereignty. In Washington, White House press secretary Jen Psaki said in a statement that the US would prohibit investment in the separatist republics and that further sanctions would be coming that were separate from the “massive” package promised if Russia invades. That package may to depend, say some US officials at this point, on whether the Russians stop their military push into eastern Ukraine or expands it for a further advance and threatens Kyiv.

That in turn depends on the responses made by the US and NATO.

In a late-night televised address to the nation, President Volodymyr Zelensky said Ukraine wanted peace, but declared: “We are not afraid” and “will not give anything away to anyone”. Kyiv needed “clear and effective actions of support” from its international partners, he said. “It is very important to see now who our real friend and partner is, and who will continue to scare the Russian Federation with words only,” he added.