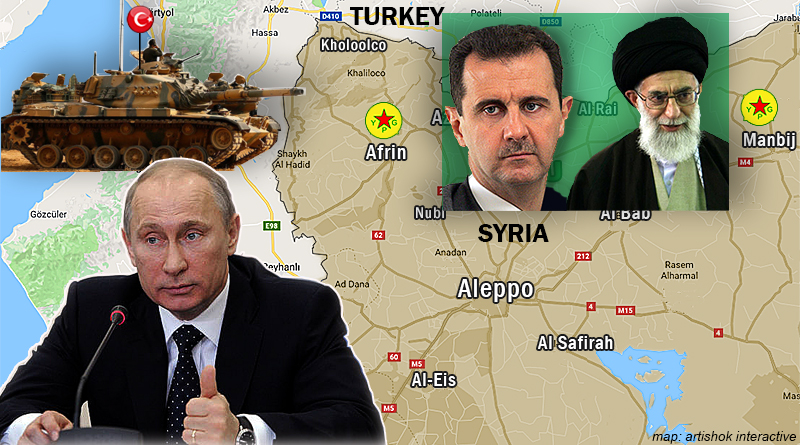 Vladimir Putin has drawn up this plan for the Sochi conference. He will put it before Binyamin Netanyahu when they meet on Monday, Jan. 29.

DEBKAfile reports that the Russian president has prepared a plan for Syria’s post-war future for presentation to the Syrian peace conference which begins on the same day at the Black Sea resort of Sochi. Moscow has taken into account 1,600 Syrian government and opposition participants. Some rebel groups have announced a boycott. DEBKAfile reports that the absentees are pro-Assad and pro-Iranian groups who are boycotting the event to reflect their masters’ objections to the Russian president’s plans. Unless he decides to back down at the last moment, those plans are substantially as follows:

In all these proposals, the Russians conferred intensively with Riyadh and Cairo – the former as a key Arab supporter of the Syrian anti-Assad opposition and the latter as a steadfast backer of President Assad. This stratagem gave Moscow the broadest possible inter-Arab approval for his plan and moreover, as DEBKAfile reports, an indirect line to Washington. Saudi and Egyptian leaders, upon receipt of the Russian plan, showed it to the Trump administration, collected its responses and passed them back to Moscow.

Only on one point did the Saudis lean hard on the Russians to alter their first blueprint. They maintained that as it stood, the regions to be allotted to the various armies for control were not clearly laid out. Moscow replied that the New Syrian Army would be taking over. But Riyadh insisted on an explicit provision mandating the expulsion of all armed foreign forces from Syria. Last week, Moscow agreed to this amendment and sent a message to Tehran that Sochi conference resolutions would include a ban on any foreign military presence in Syria. In a word, Putin had agreed to show the door to Iranian forces and all imported Shiite militias operating there under Iranian command, including Hizballah.

This was the nub of the information that Putin proposes to relay to the Israeli prime minister when they meet in Moscow on Monday, the same day as the Sochi conference. Netanyahu will also ask his host to make this measure ironclad so that Tehran and Hizballah will never find a loophole for their return to Syria. If Putin succeeds in getting part of his Syrian peace plan accepted at the Sochi conference, he will have brought off a major feat.