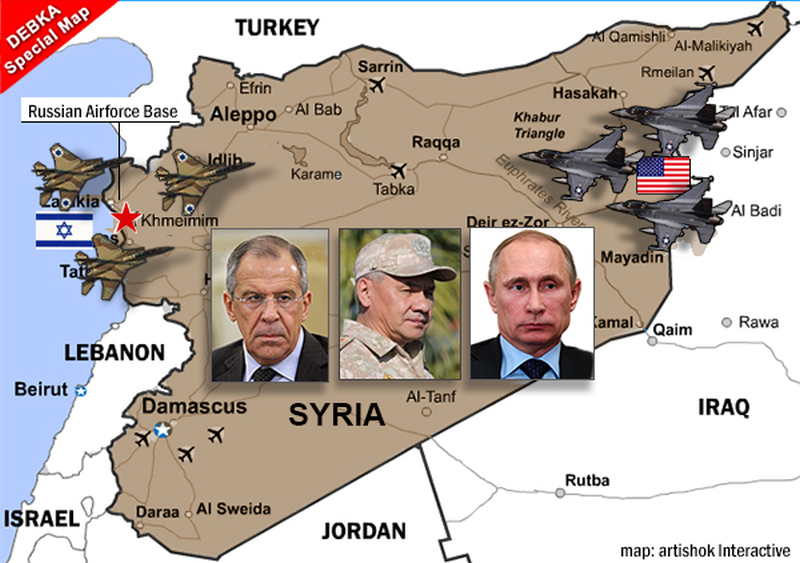 Heavy dissonance at the top of the Kremlin, deriving from the poor outcome of the Syrian war in relation to Russia’s vast investment in its success, prompted President Vladimir Putin’s sudden trip on Monday, Dec. 11 to the Russian air base in Syria, DEBKA Weekly’s intelligence sources reveal.

While demonstratively parading the Russian “victory,” Putin himself is deeply disillusioned with Russia’s meager military and diplomatic gains from its hefty input of massive air and missile power in Assad’s war. Above all, Moscow never attained the influence expected with Iran and its foreign Shiite militias, including Hizballah.

Putin, Lavrov and Defense Minister Sergey Shoigu have been heard trading loud reciprocal accusations of who to blame for Russia’s disappointment from its large-scale military intervention. The Russian president fingers Foreign Minister Sergey Lavrov for the letdown, denigrating his diplomatic performance as sluggish and hesitant. According to our sources, Shoigu agrees with Putin and holds Lavrov responsible for failing to capitalize on Russia’s military feats in Syria to build a broader international support base for furthering Putin’s regional strategy in the Middle East.

Lavrov, for his part, holds Shoigu to account, maintaining that he was overly cautious on the battlefield for fear of military clashes with American forces in Syria. His timidity left Moscow short of levers for pushing a political formula to end the war, according to Lavrov.

The US and Israel are conspicuous in the Kremlin’s blame game. Gen. Shoigu argues that, after Moscow gave the Israeli air force free rein to strike Russia’s allies in Syria – Iran and Hizballah, Russian forces were also obliged to leave the American air force just as free to operate in northern and eastern Syria. The defense minister pointed out that the freedom of operation enjoyed by US and Israeli warplanes in the Syrian conflict undermined Russia’s aerial operations and placed its air force at a strategic disadvantage.

Shoigu went on to assert that if Iran and Hizballah had been sure of Russian protection against the American and Israeli air strikes, they would have been more cooperative in helping Moscow come out of the war with a better result.

It now transpires, according to our sources, that Shoigu’s trip to Israel in mid-October was intended to gain a major reduction in Israeli air strikes in Syria. To this day, no one has revealed who, when Shoigu’s flight was on its way to Israel, gave the order for a Syrian army SA-5 air defense missile to target Israeli planes flying in Lebanese air space. That was the first time Syria had attacked an Israeli plane over Lebanon, although Damascus knew perfectly well that there was no chance of Israel abandoning its freedom to conduct air strikes when necessary either over Syria or from Lebanon. Israeli kept its response down to destroying the single launcher – not the entire Syrian SA-5 formation of batteries positioned east of Damascus.

Shoiogu gathered from this episode that this would be the wrong moment for him to ask Israel to curtail its operations in Syrian air space.

Of relevance to the row in the Kremlin are comments made by Lavrov on Nov. 14. He said that while the Iranian presence in Syria meant to prop up President Bashar Assad was “legitimate and done at the invitation of the legal government,” the presence of the US-led coalition in the war-torn country was “illegitimate.” This, he said, was because the US-led coalition “carries out military operations that support armed rebel groups” operating in Syria, and so “the United States is the bigger threat” to Syria’s future stability.

The Russian foreign minister went on to say that Moscow and Washington had not discussed the withdrawal of pro-Iranian forces in Syria, including Iran’s Revolutionary Guards. “We did not talk about Iranian or pro-Iranian forces,” he said, “If we did, some would say we should call the Syrian forces pro-Iranian forces. Should they also be made to lay down their arms?”

Lavrov also disclosed that Russian officials had held “informal talks with Israel in consideration of the fact that the area [in southwestern Syria] is in direct proximity to the Golan Heights.” The Russian minister did not disclose that those “informal talks” had failed.

Lavrov’s position is diametrically opposed to that of Putin and Shoigu. He continues to maintain that the Russian defense minister’s excessive care to avoid clashing with the Americans in Syria undermined President Putin and was responsible for Russia’s failure to attain its objectives in the Syrian war.

Shoigu recently decided to disprove Lavrov’s contention and show he is not afraid to challenge the Americans when it is necessary.

On Saturday, Dec. 9, Russian Defense Ministry spokesman Maj.-Gen, Igor Konashenkov stated that the US air force presence in Syrian air space was illegal. He went on to reveal details about an alleged near incident in which, he claimed, American F-22 stealth planes disturbed a Russian SU-22 bombing attack on ISIS in the eastern Syrian town of Mayadin. Unusually, it took the Russian official more than two weeks to come out with this complaint.

Then, on Wednesday, Dec. 13, a message came Moscow warning Israel to stop supporting Syrian rebels. The source of this warning is unknown. DEBKA Weekly’s military sources find a disturbing situation developing whereby the arguments between Putin, Shoigu and Lavrov are beginning to spill over into military discord between Russia and Israel over Syria.