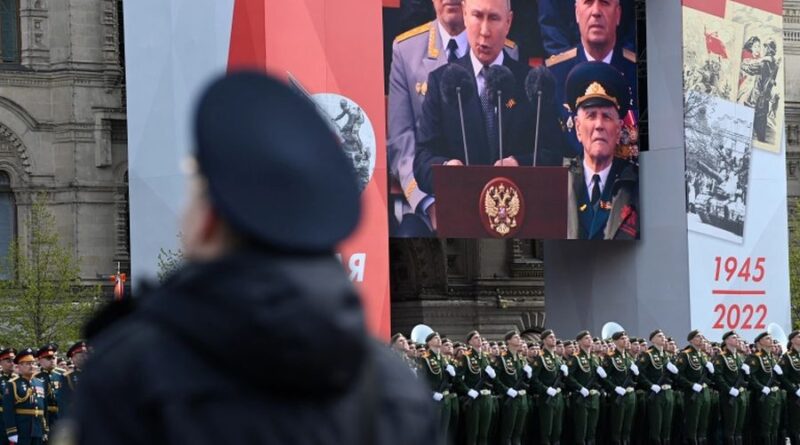 “We shall do everything so that the horror of a world war does not happen again,” said Russian President Vladmir Putin on Monday, May 9, at the annual Victory Parade marking Nazi Germany’s WWII defeat. Addressing 11,000 troops marching in Moscow’s Red Square, Putin accounted for the Ukraine invasion by accusing Nato of “actively pursuing our territory. That is absolutely unacceptable to us,” he said. “We are talking about neo-Nazis in Ukraine that the US and its partners are working with.”

Foreign military attaches attending the event noted the unusually small number of tanks and armored vehicles taking part in the parade. The usual air force flyby, was moreover cancelled, including Russia’s “doomsday” plane, an IL-80 des designated as the president’s command post for the conduct of nuclear warfare. It was called off because of “weather conditions.” However, despite some cloud cover, the flyby could have taken off. At the same time, the parade showcased a large number of nuclear intercontinental ballistic missiles.

The Russian president refrained from using the occasion to declare war on Ukraine, although he was widely expected to do so. The “special military operation” designation that accompanied the Feb. 24 invasion remained unchanged.

A prominent figure at the event was Defense Minister Gen. Sergei Shoigu, who reviewed the parade from an open vehicle and then marched alongside Putin along the lines of troops. A visible effort was evidently made to counteract rumors in the West of the minister’s failing health.
Deputy Prime Minister Yuri Borisov used the occasion to announce that Russia “is developing new-generation hypersonic missiles to carry out strikes from air, land and sea.”
Hackers planted a message on the screens of Russian television broadcasting the national parade. It said: “The blood of thousands and hundreds of Ukrainian children is on your hands!”