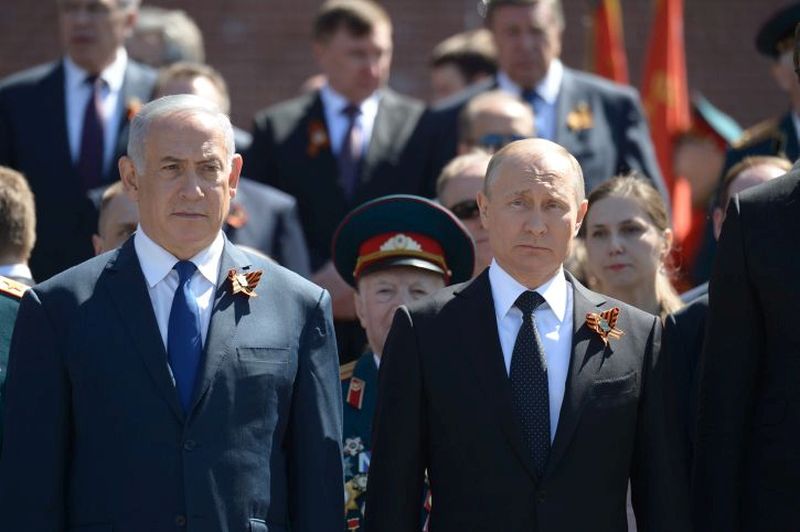 President Vladimir Putin awarded Prime Minister Binyamin Netanyahu exceptional favor on Wednesday, May 9 as his guest of honor at the Russian Victory March marking the 73rd anniversary of Nazi Germany’s defeat. But when the bands finished playing and the march-past was over, the two leaders sat down to talk about the Syrian impasse, and its evolution into the Iranian crisis, which awaits the Israeli prime minister at home. Their long conversations during the day ended without statements. DEBKA Weekly’s sources can disclose that Netanyahu’s most important business with Putin was a request for him to instruct Russian air force commanders in Syria to deny Iranian air freighters carrying fresh missile supplies from Iran permission to land at shared Syrian air fields. The prime minister brought with him a list of the Iranian surface missiles being imported from Tehran to Syria in the last few days: Fateh 313 and Fateh 110, Zelzal-2 and improved Fajr 5.

Shortly before Netanyahu’s arrival in Moscow, the Syrian military released a piece of highly confidential information of the sort that Damascus had never before published in the course of its civil war:

“A large Syrian IL-76-T cargo plane of the Syrian Arab Air Force’s 585th Transport Squadron of the 29th Air Brigade left Tehran’s Mehrabad Airport on Tuesday 8.5 at night. The IL-76A flew from Tehran and then directly over Iraqi airspace before arriving in Damascus shortly after President Trump’s Iran announcement that was followed by an Israeli aerial attack.”

This unusual communique was issued as a strong message to Moscow that, even if Putin granted his Israeli guest’s request, Iranian and Syrian cargo flights would continue to bring missiles from Tehran to Syria. After crossing through Iraqi air space, they had no need of permission from the Russian air force to land at Syrian airfields.

How the Russian leader responded to the Israeli request is not known, but our sources note that it found him on the horns of a dilemma: