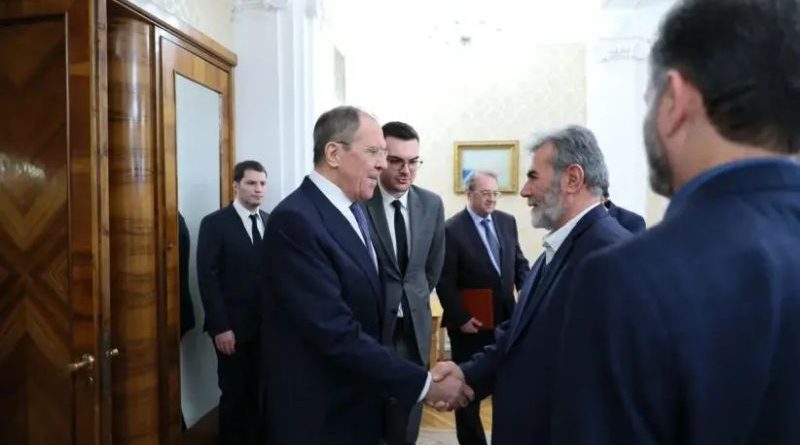 Why are the most radical Palestinian leaders made welcome in Moscow? On March 11, Russian media carried a photo of Foreign Minister Sergei Lavrov warmly shaking the hand of the Palestinian Islamic Jihad leader Ziad Al-Nakhala in Moscow. A few hours later, the photo disappeared. But a Russian Foreign Ministry communique said: “The two sides focused on Middle East peace efforts and the current situation in the occupied West Bank and the Gaza Strip.” They also discussed restoring Palestinian national unity, said the statement “under the platform of the PLO as a necessary condition for establishing sustainable direct negotiations with Israel.”

On March 2, Lavrov received Hamas leader Ismail Haniyeh. Haniyeh reported that their conversation had focused on Hamas and Palestinian relations with President Bashar Assad’s regime. No word on Lavrov’s main message, which stressed the need for Palestinian unity.

Reacting to the Lavrov-Nakhala talks, DEBKA Weekly’s sources report that Prime Minister Binyamin Netanyahu sent a message to Vladimir Putin voicing surprise at the cordial welcome Moscow had awarded the head of Islamic Jihad, a Palestinian terrorist organization backed by Iran. The Russian president has yet to reply.

Haniyeh’s talks in Moscow set the cat among the pigeons in Gaza City. His rival in the Hamas hierarchy, Yahye Sinwar, sent a note to Lavrov informing him that Haniyeh no longer holds office in the organization or in the Gaza Strip and is no more than a refugee on the move between Istanbul and Kabul who represents no one but himself.

This note served to emphasize Sinwar’s determination of Hamas-Gaza to continue the indirect negotiations with Israel and Qatar for a long-term truce deal with benefits, in support of which Qatar remits $25m a month to Hamas against its commitment to preserve calm on the Gaza-Israel border. Haniyeh takes exception to this path.

Our sources add that Moscow last Saturday forwarded the content of Lavrov’s meetings with the two Gazan Palestinians to Palestinian Authority Chairman Mahmoud Abbas in Ramallah. He responded promptly with an unvarnished message. All Hamas needs to do for the sake of cooperation is to acknowledge standing accords between the PA and Israel. In any event, elections, which are Hamas’ sine qua non for any interchange, will not be allowed to take place in the areas under PA rule.

So why does the Russian president persist in concerning himself with such a never-ending, unsolvable political dispute? The answer lies in Putin’s mode of operation. This dispute is indeed hopeless, but who knows? One day an opening may come up and then Moscow will be ready to step in with the ties and tools to hand for taking charge of events.