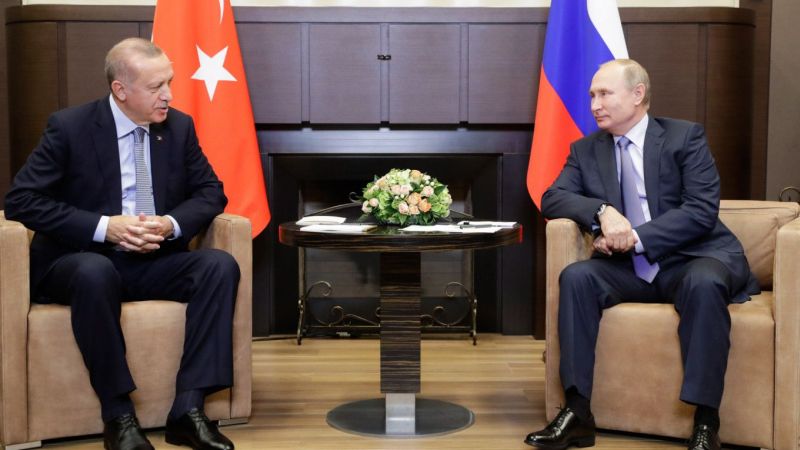 The memorandum the Russian and Turkish presidents signed at the Black Sea resort of Sochi on Tuesday, Oct. 22 offered object lessons – first, for the tactics Vladimir Putin employedtopromote Syria as Russia’s primary Middle East base and, second, for his handling of Recep Erdogan to advance that long-term goal.

That joint memorandum was strictly bilateral. Putin denied any role for Syrian President Bashar Assad in his negotiations with Turkey on Syria’s behalf. The Syrian ruler, noting his exclusion from Russian-Turkish plans, conducted a very public visit to Idlib province, the last bastion of revolt against his regime, for the first time in eight years. To remind Putin that his Syrian venture was unfinished, he told the Syrian officers and men fighting there, “The battle of Idlib is the basis for resolving chaos and terrorism in all other areas of Syria.” He was sending a message that the Turkish invasion and fate of the Kurds, which preoccupied the two presidents in Sochi, were immaterial compared with the vital battle for the liberation of Idlib.

Assad might have achieved frontline coverage by visiting the Syrian forces defending Kurdish towns against the Turkish invasion, but he did not dare provoke Putin that far.

Like Assad, the Kurds were not consulted for the Putin-Erdogan deal. Mutual distrust governs Kurdish relations with Moscow. The Russians expect the Kurds to turn back to the Americans at any moment, whereas the Kurds suspect the Russians of double-dealing against them with Turkey. They have not forgotten that, just a year ago, Moscow gave Ankara the go-ahead to wrest the Afrin pocket in northwestern Syria from Kurdish control.

DEBKA Weekly’s sources stress that the Russian leader has so far acted in quiet lockstep with President Donald Trump (as DEBKA’s sources have reported throughout the process). This partnership was visible in the chronology of events unfolding in the past week. Last Thursday, US Vice President Mike Pence and Erdogan agreed in Ankara on a five-day truce, based on a Kurdish retreat from an agreed security zone facilitated by US forces. That truce was timed precisely to expire on Tuesday, the day Erdogan arrived in Sochi. It dovetailed neatly with the Putin-Erdogan negotiations on the next steps in Syria. US sources confirmed then that “Kurdish forces have on Tuesday totally withdrawn from northern Syria ahead of the end of the ceasefire.” This was Washington’s signal that it had met its commitment to clear the ground ready for Erdogan’s announcement in Sochi that the Turkish military operation was over.

This was Putin’s main objective, as revealed explicitly in the memorandum he signed with the Turkish president. Six high points emerge from that document:

1. Russia agreed to remove the Syrian Kurdish YPG militia with its weapons to a line 30km from the Turkish border.

2. Russian military police and Syrian border guards will facilitate the removal of YPG members and weapons to beyond the zone within 150 hours.

3. The truce would be extended starting on Wednesday noon (continuing the ceasefire VP Pence concluded with Erdogan.).

5. The situation in the Syrian Kurdish towns of Ras al-Ayn and Tal Abyad, which Turkish forces were poised to attack but never captured, will remain as is up to 32km from the border. Our military sources say that this point in effect allows the Kurdish forces remaining in parts of those towns to stay in their current positions. The Kurdish YPG militia will, however, leave the towns of Tel Rifaat and Manjib.

6. Putin and Erdogan agreed that the Syrian army would hold 15 posts on the Turkish border.

7. On these terms, the Turkish army terminates its current operation against the Kurds of northern Syria.

The south, including the Daraa regions on the Jordanian border – under a deal Moscow struck with Washington in June 2018.

As a buffer between Syria and Israeli forces on the Golan since Aug. 2018.

Holding a de-escalation zone at Idlib that was approved by Putin and Erdogan in August 2019. It aimed at ending the fighting between Russian forces and Syrian rebels, including the jihadists militias backed by Turkey. Joint Russian police-Turkish patrols were to have monitored that zone.

The new memorandum places Russian forces in the northern districts as well.

Our military sources stress that the Russian military police are far short of actually controlling any of the four regions, for two reasons: In the first place, there are too few military police on the ground for performing the task; in the second, these “police” are not really Russian but Chechen recruits clad in Russian military police uniforms, with little ability and less motivation for implementing the complex deals cobbled together by Putin. (See the leading article in this issue.)

However, the Russian president has little interest in applying the fine print of those deals. For him, they are mere stepping-stones toward his real objectives, for as long as they hold up. Between the lines of his memorandum with Erdogan, DEBKA Weekly’s sources can discern three such objectives:

a. To complete his arrangements with Washington for the takeover of northern Syria and the Syrian-Iraqi border regions, following the US military pullback ordered by President Donald Trump.

b. To assert Russian monopoly over northeastern Syrian air space, so as to exercise control over US and Israeli air force activity.

c. To block Iranian and pro-Iranian incursions from Iraq into Russian-occupied parts of Syria. All those objectives were meanwhile overtaken by Trump’s decision on Wednesday, Oct. 23, the day after the Putin-Erdogan deal to retain some troops in Syria after all.