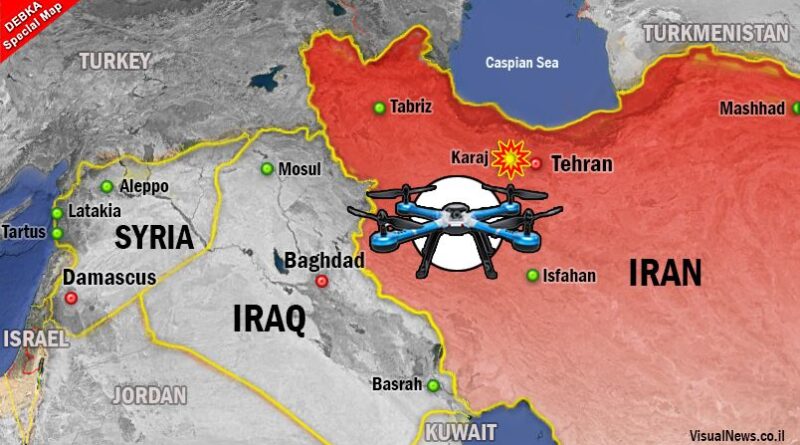 The “sabotage” attack on one of its facilities which Iran’s Atomic Energy Agency claimed to have thwarted broke new ground in Israel’s alleged covert campaign against a nuclear-armed Iran with US support. The target was a facility under UN and US sanctions near Karaj City west of Tehran that, according to some intelligence sources, manufactured centrifuges for refining uranium at the Fordow and Natanz enrichment centers.

The novelty in this case was the nature of the weapon and how it was used. Iranian media cited “a small quadcopter drone” as the weapon, which was launched from inside the country. Clearly, an unknown entity released the small device from a point inside Iran after first loading it with an explosive charge or small rocket. It is worth recalling former Mossad chief Yossi Cohen’s disclosure in an interview on June 10 that the team which purloined the Iranian nuclear archive from its hiding place in Tehran in April 2018 was comprised of a team of non-Israeli operatives.

It is no secret that Israel and American spy agencies both have ties with cells of the Mujahedin-e-Khalk resistance movement, which is not news to the security agencies in Tehran. But that a dissident group fired off an armed UAV against a nuclear facility from inside the country marks a key crossroads in the conflict.
Quadcopter drones are on sale together with simple instructions for their assembly and use in any camera shop or online – even on e-Bay. Some carry cameras; others a forklift for loading freight. The operator programs its destination in advance and then tracks it on a screen.

Assuming that an MEK cell performed the deed, was it acting on its own initiative, for Israel, for he US or for both? No one has claimed responsibility for this attack – any more than for previous clandestine sabotage strikes on Iran’s nuclear-related facilities. The fact that Iranian officials were ready to talk to the The New York Times, rare in itself, seems to indicate that Tehran is at a loss for information on the authors of the attack.

The election of Ebrahim Raisi, an ultra-hardliner, as Iran’s new president increases the chances of the Islamic Republic retaliating in kind with attacks on US targets and interests in the Middle East or Israel. And, indeed, the Iranians are already deep in UAV warfare against their perceived enemies.  As recently as on June 4, an Iranian explosive drone was launched by Iraqi Shiite militias against the big American Ain al-Asad airbase in western Iraq. No one was hurt but the damage was extensive. Armed drones were also fired this month into Baghdad’s Green Zone, seat of government and the diplomatic row, including the US embassy.

The spreading UAVsyarfare, its implications and countermeasures, ,were almost certainly discussed at meetings between US and Israel security officials and experts late last month. In military terms, UAV weaponry turns the development clock back from the highly sophisticated and costly air defense missile systems in current use, to simpler defensive solutions. This point was illustrated this week when Israel announced the completion of tests on the first airborne, high-power laser defense system. Installed on a regular aircraft, the laser system intercepted and destroyed several UAVs at various ranges and different flight altitudes. The defense ministry said the new device would be operational in another three to four years. The new gadget was unveiled during IDF Chief of Staff’s talks at the Pentagon.