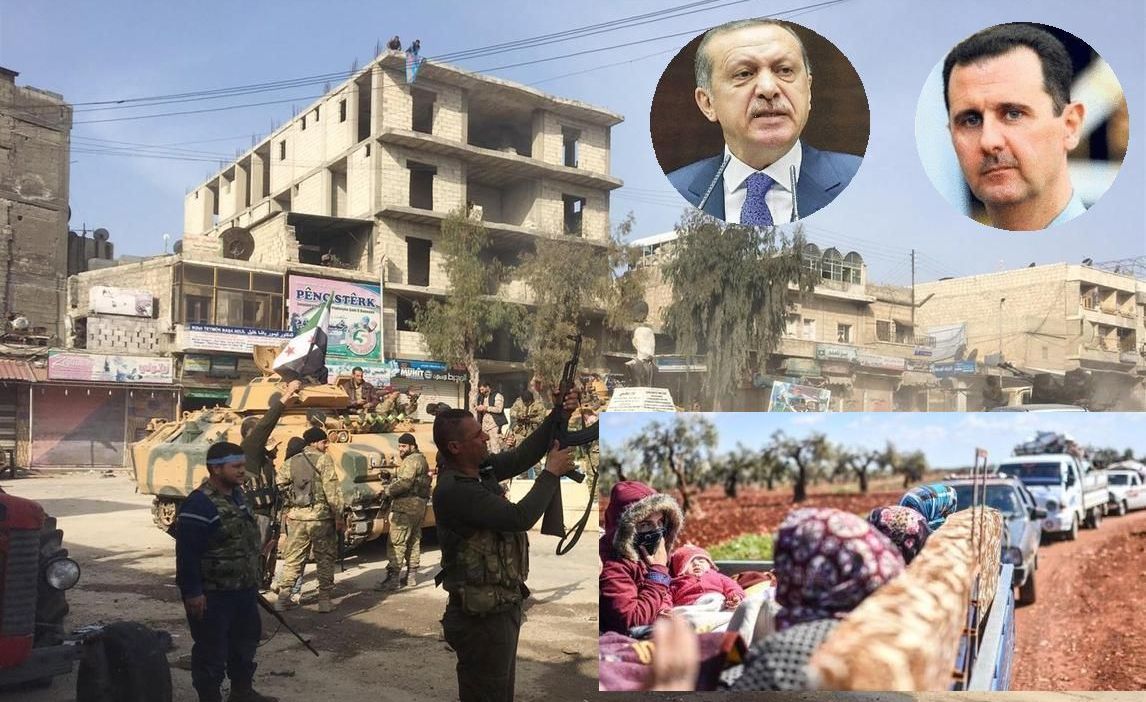 The Turkish army and its surrogates took control on Sunday March 18 of the Kurdish Afrin City in northern Syria, as some 200,000 Kurds fled the town of a million inhabitants. It is unclear what happened to the Kurdish YPG militia holding the town against the Turkish invaders and their local surrogate, the “Free Syrian Army. Some say they withdrew and mingled among the constant stream of refugees fleeing north towards areas under Syrian military control; others that the YPG is regrouping for a counter-offensive. But meanwhile, Turkish bulldozers knocked over the statue of a Kurdish hero in Afrin town center and surrounding buildings were arrayed with Turkish flags.

Turkish President Tayyip Erdogan could boast that his army had taken control of Afrin city, although it took nearly two months to complete Operation Olive Branch and achieve its object of expelling the leading Kurdish party and militia from one of its main cantons in northern Syria.
The US and Russia went through the motions of trying to dissuade Erdogan from this path to avert the major humanitarian catastrophe which is now at hand. However, they did not actually lift a finger to stop him. The Turkish president played the game by sending delegations to Washington and Moscow to hear their arguments, but his only object was to chalk up diplomatic mileage and buy time for his army to reach its goal.
The capture of Afrin is proving to be stage one of Erdogan’s campaign of expansion. He used the free hand granted him to recruit 30 Syrian Sunni militias for doing his bidding in northern Syria. Now, he has the brass to claim equal standing in northern Syria with Russia and the United States and demand that the two powers give his wishes due consideration.

With the Turks evidently on the march, DEBKAfile’s military sources disclose that, on Saturday, March 17, US forces based in northern Syria began redeploying to new positions for defending Manbij, another Syrian Kurdish town coveted by the Turkish president. This town is his next target, once the Turkish army winds up its Afrin operation. Marine Corps Lt, Gen. Kenneth McKenzie, Director of the Joint Operations Staff, ordered Marine reinforcements transferred to Manbij and US units based in Iraq to cross the border and head for the Kurdish areas of northern Syria.
In another part of Syria, Bashar Assad, like Erdogan, is looking forward to an imminent victory for his army and allies, after a month of the some of the bloodiest warfare in the civil war. East Ghouta, the last rebel stronghold in the Damascus area, is about to fall. Sunday, a spokesman for the Fallaq al-Rahman, the leading rebel group still holding out in the southern pocket of the enclave, said his group was in negotiations for a ceasefire “to guarantee the safety of civilians.” DEBKAfile: They are in fact negotiating for terms of surrender. The insurgents are in a hopeless situation. Lacking the weapons for fighting off the air, ground missile and artillery barrages aimed at them, they never stood a real chance of winning the day against the merciless bombardment inflicted indiscriminately on the enclave and its inhabitants by the Syrian army, with Russian air force and pro-Iranian Shiite militia backing.

Hundreds of civilians died in the merciless month-long hammering. According to UN estimates, at least 25,000 civilians have fled the enclave in the past week alone – many on foot with their belongings on their backs. Both the Turkish and Syrian presidents remained unmoved throughout by the horrors attending their brutal assaults on the civilian populations of the two enclaves, and the deaths and privations of women, children, the sick and the wounded. And the world stands by as another quarter of a million Syrian civilians flee their homes for unknown destinations. Altogether it is estimated that the Syrian war has resulted in more than 12 million refugees and displaced persons, of whom 5 million fled across the border.