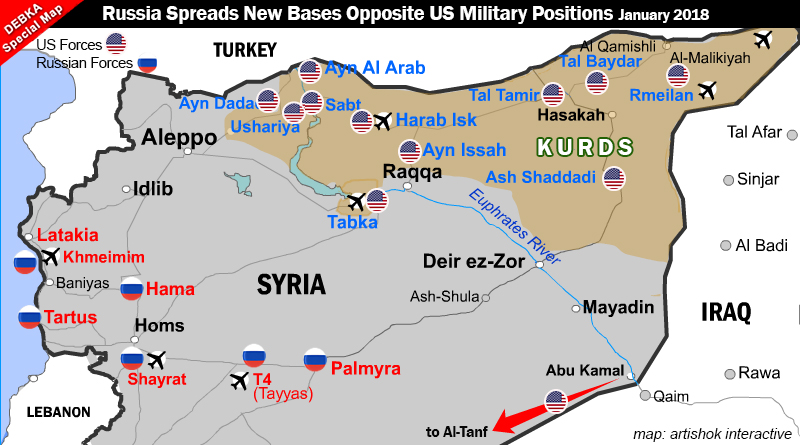 Contrary to Moscow’s promises, the Russian military is not pulling out of Syria, but adding four more air bases (one shared with Iran) and 6,000 more troops.
On Dec. 11, 2017, Russian President Vladimir Putin, followed by Defense Minister Sergey Shoigu, announced that the Russian military was to withdraw from Syria to home bases. DEBKAfile’s military and intelligence sources report that the reverse happened. A small number of units were indeed sent home, but they were sooner replaced, and instead of two bases – the air facility at Hmeimim and the naval installation at Tartus – four more Syrian air bases are being reconstructed and adapted for the use of the Russian air force.
The attached map illustrates their locations:

More than 6,000 additional Russian military personnel are assigned to the four renovated bases in Syria – most of them air force and special operations personnel. Some have arrived.

The attached map shows how the new layer of Russian bases in western, central and eastern Syria faces the chain of military locations the Americans have decided to keep in northern Syria. The two powers are evidently in a race for bases in Syria. In strategic terms, the two powers are dividing a large swath of Syria between them as regions of influence, leaving any future ruler in Damascus with just about half of Syrian territory under government control.