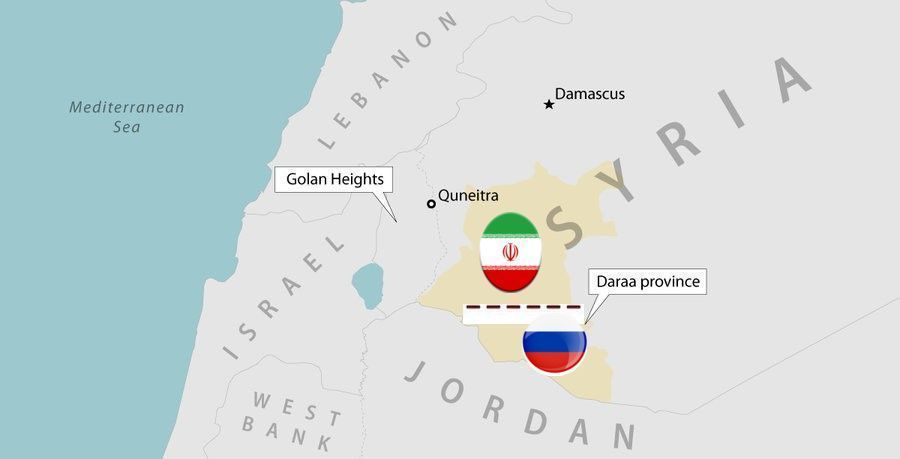 Exclusive: Deep apprehension in Israel over a Russian U-turn, which is letting small Iranian Al Qods and Hizballah units regain former positions 10-15km from the Israeli and Jordanian borders. They are coming back after Russian forces drove them out last year and established a safe zone at those border districts in their stead.
Reporting this turn of events, DEBKAfile’s military and intelligence sources add that the Russian forces, not content with allowing this Iranian-Hizballah comeback, have also evacuated their own positions, leaving the local population under the control of the Al Qods and Hizballah invaders. These actions violate Russian President Vladimir Putin’s commitment last year to US President Donald Trump and Prime Minister Binyamin Netanyahu to purge S. Syrian borders of the hostile elements ruled from Tehran and provide monitors for a safe zone.

Washington and Jerusalem have interceded strongly with Moscow against this breach while trying to establish whether they were ordered from Putin’s office in the Kremlin or the local command on a directive from the Russian defense ministry. For now, neither the US nor Israel has decided how to respond to the new pro-Iranian buildup at Israel’s back door. They are also trying to find out if the Russian step is Moscow’s response to the US-Turkish safe zone initiative for northeastern Syria. This week, a large American unit landed in southern Turkey to start activating the joint US-Turkish safe zone, which aims to separate the Turkish army from the pro-US SDF militia which is dominated by Syrian Kurds. Moscow may have opened the door to Iran in southern Syria to counter expanding US involvement in the north.

Israel showed first resistance to the new hostile presence at its border on July 24 by firing surface missiles at the intelligence stations Iran was setting up on the Tal Al-Harara hilltop opposite the Golan border. But the Russian move continued notwithstanding.
The coming issue of DEBKA Weekly (for subscribers) out on Friday, Aug. 16, offers an up-to-date picture of the big power movements in Syria and their repercussions. To subscribe, click here.