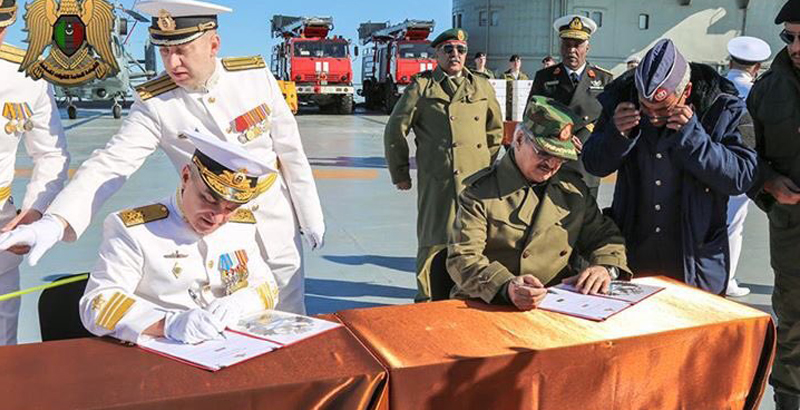 Russian President Vladimir Putin’s influence-buying tactics in Libya baffle many watchers, including his own people, because he appears to be riding two horses galloping in opposite directions.

One is the UN-approved Government of National Accord (GNA), based in the northwestern town of Tripoli. The other is the Libyan National Army (LNA), led by the former Qaddafi general Khalifa Hafter, which heads the eastern government in Benghazi.

Both sent emissaries to Moscow in the second week of September: Ahmed Maiteeq represented the Tripoli-based administration and Ahmed al-Mismari spoke for General Hafter.

They were trailed by a third visitor, the new UN Special Envoy for Libya, Ghassan Salame. He met Russian Foreign Minister Sergey Lavrov and they were officially said to be cooperating.

The first two emissaries’ missions were much more complicated, particularly after Putin appointed his ally in Grozny, the Chechen ruler Ramzan Kadyrov, to liaise between the two Libyan factions fighting each other for supremacy.

Hafter’s man, Al-Mismari informed his Russian hosts that the Libyan National Army (LNA) now controls 90percent of Libyan soil and is at the forefront of the war on terrorists. He complained of a shortage of armaments and accused the Tripoli party of failing to uphold the ceasefire accord they reached in Paris in July.

His opposite number, Maiteeq boasted that the UN-approved government had secured Tripoli, repaired its crippled infrastructure, come up with remedies for the ravaged economy as a means of combating extremist terrorism and was on the way to uniting Libya’s armed forces.

DEBKA Weekly’s sources: Maiteeq omitted to mention that the government’s authority in Tripoli extends to only parts of the city.

The answer the Russians gave to the two rival factions was typically succinct: “We are working with all the parties, whether you like it or not.”

It was also a message to the West, not to interfere in the Kremlin’s ongoing high-wire strategy for Libya.

Putin is building up his image as grand master of foreign tactics and policies ahead of Russia’s next presidential election in 2018. By then, he hopes to have extended his policy of expansion from the Middle East to Africa.

Meanwhile, he is busy enhancing his relationship with Egyptian President Abdel-Fatteh El-Sisi – and looking ahead to the three-day visit to Moscow by Saudi King Salman Bin Abdulaziz in the first week of October.

To impress the two Arab rulers, Putin must show evidence of his deepening influence and active intervention in Africa, especial in the northern Arab states.

Russia is to build Egypt’s first nuclear power plant under a contract finalized this month and their military cooperation has been moving forward for the past seven months.

DEBKAfile of March 14 revealed the arrival of Russian special forces contingents, armed with assault drones, at Sidi Barrani, Egypt’s air base on the Mediterranean coast of the Western Desert. This base lies 95km from the Libyan border and 240km from the eastern Libyan oil terminal port of Tobruk.

Their landing was later confirmed by the Egyptian military.

The Russian president is betting on Gen. Hafter, who controls the oil-rich eastern sector, coming out on top of the Libyan upheaval and beating down the UN-backed Tripoli government to eventually emerge as national leader of all Libya. The Libyan general has made three trips to Moscow in the past year and won the promise of Russian diplomatic and military support. Moscow also flew dozens of his army’s wounded soldiers to Moscow for medical treatment.

The reward Putin hopes for is greater access to energy markets and the crown of international peacemaker, attained by the ploy he uses in Syria of playing all sides. At the end of the day, he hopes to make Tobruk the next Russian air and naval base in the Mediterranean, as counterpoint to Latakia in Syria. Hafter’s LNA will provide protection.

The Russian leader’s horizon encompasses all of North Africa. Algeria is a long-time friend and biggest buyer of Russian arms in the last decade. In 2014, Algeria signed a $1billion deal for the further purchase of Russian weapons, described as “possibly the world’s largest export contract for main battle tanks.”

In March 2016, Moscow welcomed Morocco’s King Mohammed VI for his first visit in fourteen years. They signed a series of accords on energy and counterterrorism plus a “declaration of deep strategic partnership.”

Washington will have its work cut out to keep Putin’s hands off this important US North African ally.

His deep military intervention in Syria is meanwhile paying handsome dividends – even before the country winds down its bloody war.

Russian’s military industry has been using the Syrian battlefield to showcase its most advanced tools of war. Deputy Defense Minister Yuri Borisov boasted last month that “customers are queuing up for the weapons which have proven themselves in Syria.”