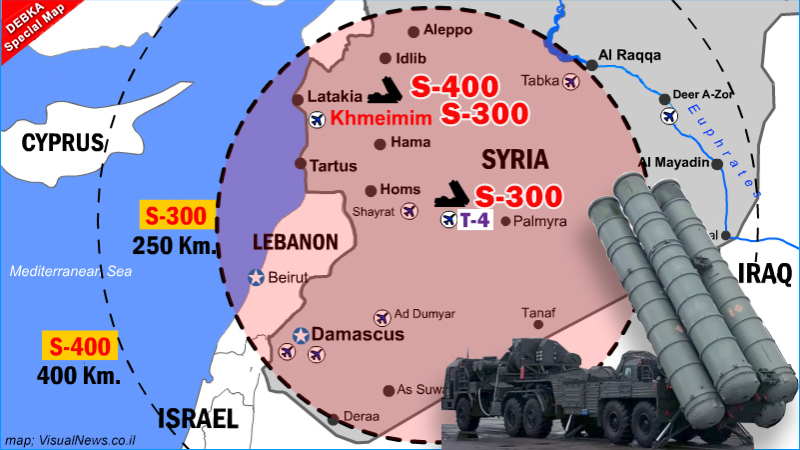 Moscow and Tehran jumped on two unforeseen events for major strategic leaps in Syria, without running into opposition. The accidental downing of the Russian Il-20 spy plane by Syrian missiles on Sept 17, was used by Russian President Vladimir Putin to integrate the new S-300 air defenses he sent to Syria with the nuclear C3 command, control and communications system guarding Russia’s own cities and military installations. This dependence reduces Syria to near-satellite status.

Iran’s equally quick-witted Qassem Soleimani seized on revenge for a terrorist attack on an IRGC military parade in Ahvaz on Sept. 22, as the cover story for sending a new military aerial combat arm into action over eastern Syria directly from Iranian soil. A barrage of eight surface missiles and a squadron of stealth drones were launched on Oct. 1 for the first time from the Revolutionary Guards base in Kermanshah.

These game-changing events, which are going forward without US or Israeli counteraction, are explored in detail in this epic issue of DEBKA Weekly.

In the immediate aftermath of the Il-20 plane disaster, Putin led Prime Minister Binyamin Netanyahu to believe that he would hold up delivery of the S-300 air defense system promised to Syria until they sat down together to settle their differences. Netanyahu passed this message on to US President Donald Trump.

An American MC-12S EMARSS spy plane, flying almost daily out of Heraklion airport in Crete along the Syrian coast, reported that the Iranian and Syrian air forces were pulling out of Syria’s largest air base at Tiyas (T-4), which is situated in the Homs Governate west of Palmyra.

The American spy plane has a suite of signal-snooping gear to track and eavesdrop on enemy communications and record full-motion video day or night. It also has a work station connected to the Distributed Common Ground System-Army intelligence data network, whose task it is to help collect, compile and speedily distribute information across units.

Trump and Netanyahu were encouraged to believe that the crisis was beginning to wind down.

However, it turned out, DEBKA Weekly’s intelligence sources reveal, that, although Russian air force units did move out of T-4, a Russian air force engineering unit moved in. Its teams were now working around the clock to convert Tiyas – 183km southeast of the Russian Khmeimim Air Base – into a fully-equipped Russian and Syrian air defense command center for the intake of Russian S-300 air defense batteries. (see attached map).

US and Israeli air force intelligence experts watching them work concluded that T-4 was not only being prepared to house the incoming S-300 batteries but being remodeled as Russia’s second air base in Syria after Khmeimim – and possibly even to replace it.

This development lent the S-300s being delivered to Syria a special role in Putin’s wider schemes. Defense Minister Sergei Shoigu, when he announced that Syria’s “unified air defense control system will be fully operational by 20 October,” did not reveal that it would not just be linked to Khmeimim as hitherto, but to the Russian nuclear C3 command, control and communications system guarding Russia’s own cities and military installations. Elements of the C-3 system will therefore be transferred to Syria and installed alongside the S-300 at T-4. This turn of events projects major repercussions for eight reasons: