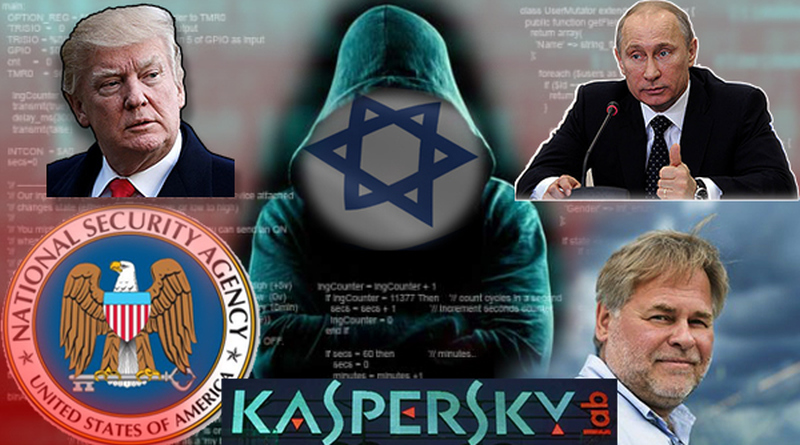 Amid its dogged pursuit of its political campaign to get rid of US President Donald Trump, the New York Times ran an exposé Wednesday, Oct. 11, of how in 2015, Israeli government hackers “saw something suspicious in the computers of a Moscow-based cybersecuity firm that could only have come from the National Security Agency.”

Israeli intelligence passed the information to the NSA.

The paper went on to report that “Israeli spies had found the hacking material on the network of Kaspersky Lab, the global anti-virus firm under a spotlight in the United States because of suspicions that its products facilitate Russian espionage.”

The tool that Kaspersky developed and is marketing around the world is called “silent signatures”. It consists of strings of digital code that operate in stealth to find malware, but which could also be written to search computers for potential classified documents, using keywords and acronyms.

It would be naïve to believe the Moscow-based firm’s claim of ignorance that its software had reached the computers of the Russian FSB spy service, or its denial that it had been used as a major tool for digging out the secrets of the United States and its Western allies.

It equally defies belief that the NYT’s revelations were picked at random out of a hat. Clearly, the source which leaked to the paper the information – that the “National Intelligence Council had completed a classified report about Kaspersky that was shared with NATO allies” – was actuated by at least three motives:

The date is critical: Israeli hackers are said to have tipped off the NSA to the Russian breach of its tools in 2015 – i.e., well before Trump began campaigning for president. This begs the question of why Barack Obama who was then in the White House, did not put a stop to Russian cyber skullduggery. And the implied answer is that although Obama knew about it, he kept it in place, on the advice of a party in the US intelligence community, as a sharp weapon for stigmatizing any rival who dared challenge Clinton as a colluder with Moscow.

This episode demonstrates how domestic political interests at the time prevailed over national security considerations.

During the darkest cold war years in the last century, Russian counterintelligence kept ahead of the power game by running a bottomless supply of double spies in almost every Western spy agency, creating an impenetrable system of double mirrors. Whenever one Russian mole was exposed, a replacement stepped in from an unsuspected level of sleepers. Among them were American, British and French secret agents who secretly served Moscow from inside their services. Some of those deeply buried cells remain undiscovered up to the present.

Moscow is now shown to be following the same double-mirrors method, only with different tools. Instead of human double agents, its counterintelligence agency is planting secret cyber spies posing as anti-virus software.

The Russian “silent signatures” software uses strings of digital code operating by stealth to find malware – but also to search computers for potential classified documents by keywords. This software lurks inside computers and snatches their owners’ secrets in a way that defies discovery.

It is this tool which is giving Russian intelligence the upper hand in the clandestine war with America and the West.