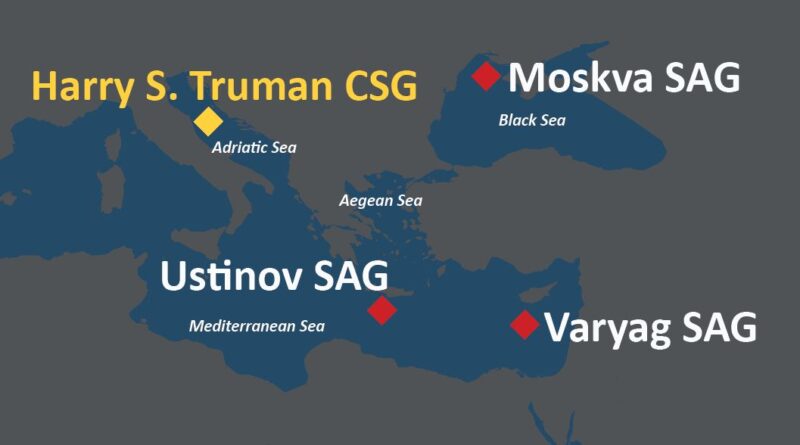 Three Russian guided missile cruisers took up battle positions in the Mediterranean on Wednesday, Feb. 23, opposite the USS Harry Truman, the Italian ITS Cavour and French FS Charles de Gaulle strike groups. For the first time, the consequences of the Ukraine crisis seem to be spilling out of East Europe over to the Mediterranean arena.

The Russian warship array finds the Moskva cruising south of Italy, the RFS Varyag, in the eastern part of the sea and the RTS Marshal Ustinov off the coast of Syria. They are all armed with Sandbox anti-ship cruise missiles, which have the capacity to sink aircraft carriers.

The three-ship Western fleet was boosted this week with four guided missile destroyers, USS Earl Porter, USS Roosevelt, USS Ross and USS Arleigh Burke DDG-51. Adm. Mike Gilday, chief of US Navy Operations, said that the US Navy was prepared to interact with the Russian Navy in the region. “Given this current situation, the chance for miscalculation is greater. That is why we train to a very high standard.”

Closer to Ukraine, the Pentagon released information about the American force ordered to the Baltic region on Russia’s borders, as first announced on Tuesday night by President Joe Biden. These forces include an infantry battalion of 800 troops heading to the Baltics, the repositioning of eight F-35 Lighting II Joint Strike Fighters further east, 20 AH-64 attack helicopters moving to the Baltics region and another 12 AH-64 helicopters heading to Poland.