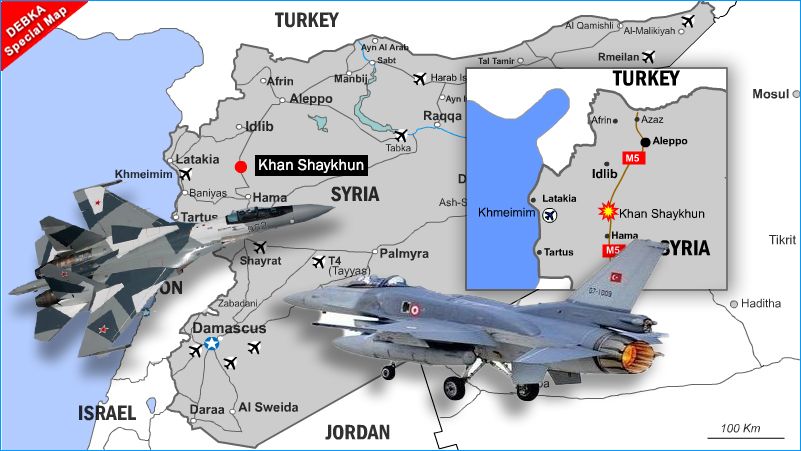 As the Syrian army advanced against Hay’at Tahrir al-Sham rebel forces in the key southern Idlib town of Khan Sheikhoun, Turkish Air Force F-16 fighters on Tuesday, Aug. 20 flew over the battle scene, causing Russian Su-35 fighters at the Khmeimim air base near Latakia to scramble in response. They warned the Turkish pilots to withdraw or else be shot down. DEBKAfile’s military sources report that the Russians accompanied their ultimatum by positioning the S-300 and S-400 air defense batteries deployed at the base at the ready. A short time later, when the Turkish air crews saw the Russian Su-35s flying alongside, they turned tail and left Syrian air space.

Western military sources tracking the fighting in Idlib believe that, although the Turkish pilots were told to break contact with their Russian pursuers on Tuesday, they may try again if the rebel force supported by Ankara falls back under the Russian-backed Syrian government offensive. The danger of a direct Turkish-Russian air engagement is therefore likely to recur.

The last Turkish-Syrian aerial showdown occurred four years ago when, on Nov. 25, 2015, a Turkish F-16 fighter downed a Russian Su-24M strike plane over northern Syria. The crisis in Russian-Turkish relations lasted for several months. Our sources stress that Turkish President Recep Erdogan is evidently determined at all costs to thwart the Syrian-Russian drive in Idlib, so much as that he is willing to take on President Vladimir Putin in head-on operations to achieve his ends.

A colonel from a Syrian rebel faction confirmed that fighters from a Turkish-backed rebel force have joined the defense of Khan Sheikhoun. Our sources identify this force as a Turkman militia which fights under Turkish officers. According to earlier reports, a Syrian government air strike failed to stop a Turkish convoy heading to the northern Syrian town of Morek. The convoy is reported to have included about 50 armored vehicles, at least five of which were tanks.