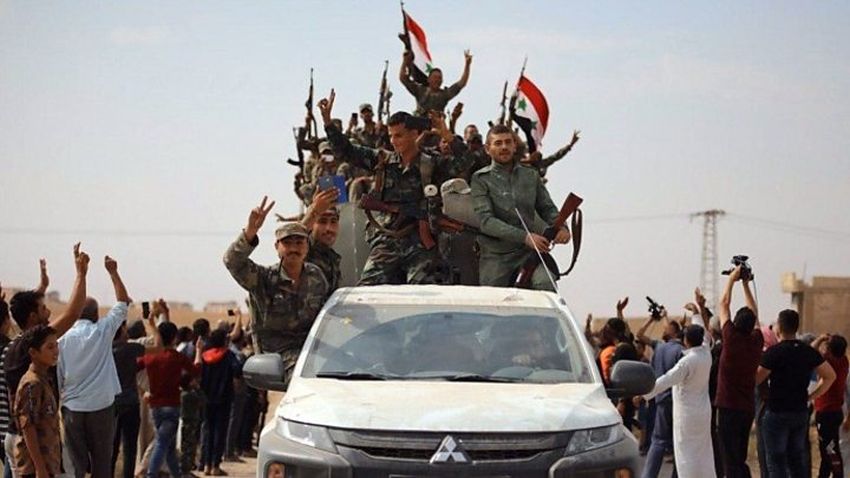 The Syrian army’s arrival at embattled Kurdish towns in the north east, backed by Russian threats, seemingly halted the Turkish army’s advance. On Tuesday, Oct. 15, only minor isolated incidents were visible.  Although Turkish President Recep Erdogan boasted on Monday, Day 6, “We will not back down,” he also said, “We are coordinating with the Russians,” and praised their “positive approach.”

For now, therefore, the Turkish army looks like sidestepping direct clashes with the Syrian army, which has meanwhile entered Manbij and prevented the Turkish army from moving in. Kurdish forces remain in control there, as well as in the towns of Tal Abyad and Ras al Ayn, which Turkish sources on Monday claimed had fallen.

On Tuesday morning, it looked as though the Turkish president had paused for reflection before deciding if and how to proceed with his operation, in the light of the Russia/Syrian threat to his forces. He needs to calculate how far he can go against the Syrian army without incurring Russian military intervention. He understands that President Vladimir Putin will not put up with an artillery attack on Russian forces like the one “mistakenly” directed against US troops at the outset of the Turkish drive into northeast Syria last week.

President Donald Trump has meanwhile followed up on his order to pull 1,000 US troops out of northern Syria with a second order for their withdrawal from the eastern regions alongside the Syrian-Iraqi border. He said those troops would remain in the Middle East and keep watch on the Syrian arena from a distance. In a phone call to Erdogan, Trump demanded an immediate truce in the hostilities in northern Syria, as US sanctions were announced by the Treasury in Washington on Turkey’s war leaders, the defense and energy ministries as well as ministers of defense, energy and interior. Trump also raised by 50pc the tariffs on imported Turkish steel and halted negotiations for a $100bn trade agreement.

The US president has delayed, but never wavered from, his resolve to pull the US military presence out of Syria. In July 2018, he withdrew US support from Syrian insurgent groups in southern Syria and handed control of their regions to Russian and Syrian forces. Israel collaborated with Trump’s moves by lifting its control of the areas adjoining the Golan and allowing them to revert to the Assad regime along with the Syrian rebel groups with whom Israel had collaborated during the war.

Trump’s actions in October 2019, for transferring control of northern and eastern Syria to Russian-backed Syrian government forces, are therefore part of the same consistent policy.

Early Tuesday, US sources in Washington revealed that US forces would remain at one last Syrian location, the large garrison at Al Tanf which commands the key intersection of the Syrian, Jordanian and Iraqi borders.
From Israel’s perspective, the Trump administration’s decision to pull back from eastern Syrian positions – from which US forces were able to keep the Iranian presence tied down to one place, Abu Kamal – opens most of the Syrian-Iraqi border for Iran, Hizballah and the pro-Iranian Iraqi Shiite militias, which are already in control of the Iraqi side of the border, to gain free passage into Syria..