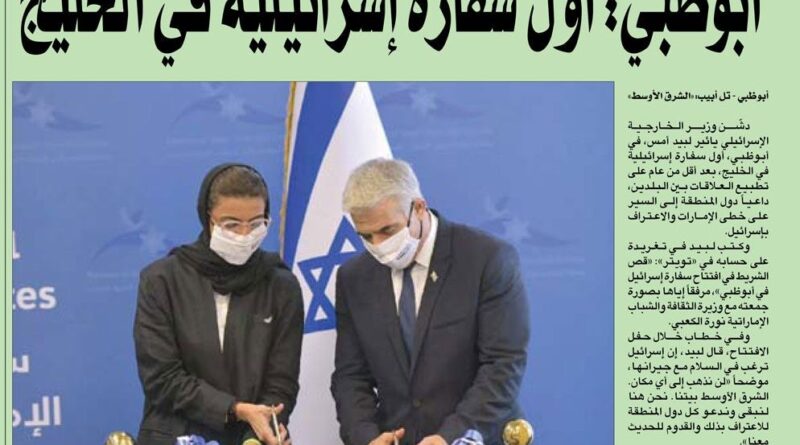 Indications of a radical policy turnaround in Riyadh towards jumping aboard the peace wagon rolling forward between Gulf nations and Israel were highlighted in a column published on July 1 by Asharq Al-Awsat, the London- based publication close to the Saudi royal house. Last week’s visit by Foreign Minister Yair Lapid to the United Arab Republic and Bahran, the first by an Israeli minister to the signatories of the Abraham Accords, was extensively covered in the Saudi media as a historic event, the columnist noted.  One paper front-paged a picture of Lapid backed by the Israeli flag, And TV channels have begun inviting Israeli pundits to live talk shows, often introducing them as experts “in Jerusalem.”

Decades-long taboos are being tossed, as the Saudis eye the booming trade ties their neighbors are binding with the Jewish state.

Saudi and other Arab commentators have come to believe that Crown Prince Muhammed bin Salman has already come around to recognizing that Riyadh is being left behind by clinging to an outdated policy that links recognition of Israel to the Palestinian conflict. This no-war-no-peace stance has become leads nowhere. MBS has long realized that the kingdom’s-oi-based economy can no longer sustain a population which has grown to 35 million and is expanding. Diversification is the way as the Emiratis’ have already shown. To branch out as a hub of services, tourism and trade, the Saudis will likewise have to eschew conflict and embrace good relations.

The Crown Prince understands he must choose sides between the two blocs fast emerging in the Middle East. One led by the Arab states and Israel based on their peace relations as a strong engine for generating wealth and prosperity for their peoples, and the other one, led by Iran and its focus on developing a nuclear weapon and aggression while its population stays hungry.