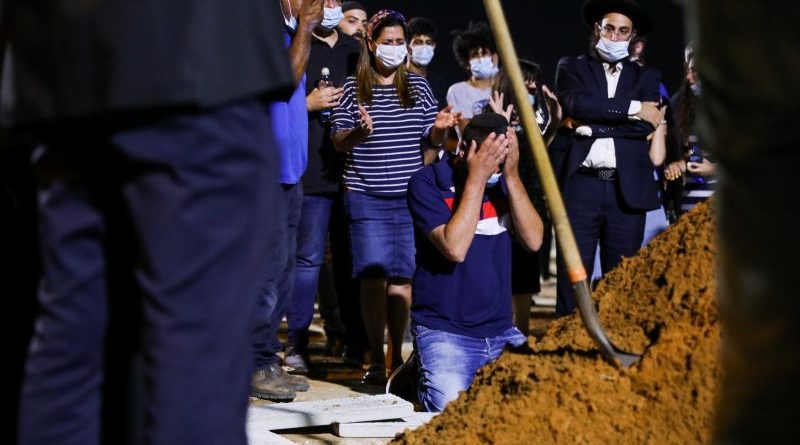 Terrorist harassment of Israel is gaining ground on three fronts – though still short of a showdown. Is Israel holding back on deterrence?  The shocking murder of Rabbi Shay Ohayon in central Israel on Wednesday, Aug. 26 by a licensed Palestinian worker jerked this question into the national consciousness, over and above concerns about the covid-19 infection spike, an economic crisis and a quarreling government. In the north, Hizballah sharpshooters fired from Lebanon on IDF troops and in the south, Hamas kept up its three-week long balloon offensive, interspersed with rocket fire.

The three occurrences are not on the face of it linked, but they do share common background factors. One is the IDF’s apparent reining in of its responses – whether over a Israel’s reluctance to be drawn into major military operations while its government battles the ungovernable covid-19 and strives to damp down its economic fallout, or possibly for fear of forfeiting thereby the huge benefits offered by the epic normalization accord signed with the United Arab Republic with US mediation.

A certain factor must be US Secretary of State Mike Pompeo’s current tour of the region this week in search of Arab governments willing to follow in the UAE’s footsteps and, possibly, stage a regional peace conference in time for the US presidential election. He has encountered some lukewarm responses, in step with Saudi Arabia. But Pompeo could count on Prime Minister Binyamin Netanyahu’s solid support in this endeavor. And if this meant holding the IDF back from full-scale punishment for terror at this time, that, too, may be a factor.

Rabbi Ohayon, 39-year old father of four, had just stepped off a bus in central Petah Tikva when a 49-year old Palestinian from a village near Nablus stabbed him repeatedly with a big knife. Paramedics tried to revive the unconscious man before evacuating him to hospital, where doctors in the intensive unit were forced to pronounce him dead.

The rabbi was praised at his funeral on Wednesday night as a model father and husband, who combined his own studies with thrilling lectures to his students.

The Palestinian killer is among the 150,000 West Bankers licensed to work in Israel after security clearance.
The rabbi was the first Israeli to be murdered by a Palestinian in almost a year. Five weeks ago, another Israeli survived a similar stabbing attack with serious wounds. This sequence has raised questions about a revival of the former terrorist tactic of individual t murders.

The gunfire from 200m inside Lebanon was aimed at Israeli soldiers patrolling the northern border – and missed. It was attributed to Hizballah marksmen and taken as evidence that the group’s leader Hassan Nasrallah has not abandoned his vow of revenge for each of his men killed by Israel. He cited a fighter killed in an Israeli air strike some weeks ago against an Iranian target in Syria. But all his previous attempts to avenge his death by killing Israeli troops have failed.

The IDF struck back on Wednesday against Hizballah observation posts just inside the Lebanese border – a relatively mild response. However, the forces remain  ranged in full array on high alert along the Lebanese and Syrian Golan borders, on the assumption that, despite his falling standing at home, Nasrallah will not rest until he reaches his mark. Hizballah is expected to keep on probing for a chink in IDF armor and settle accounts by causing Israeli troop casualties, although the military spokesman warned on Thursday that the army’s next response would be a lot stronger than hitting a few observation posts.. .

The IDF’s self-restraint was most striking in the first Hizballah attack. A Hizballah squad assigned with attacking the IDF outpost on Mt. Dov north of the Golan last month was sighted while still climbing the slope. The squad, scared off by Israeli tank shelling and gunfire, turned tail before reaching the outpost, dropping a marksmen’s rifle in its haste. After a quick check with superior officers who referred the incident to government officials, the outpost commanders let the Hizballah squad get away without harm or even take them prisoner. The order was to avoid a major eruption. Subsequently, on Aug. 3, a Syrian cell was shot dead trying to plant explosives for Israeli forces near the Golan border fence. They were believed to have been hired by Iran.

If Israel’s responses to aggression in the north are mixed and have little visible deterrent effect, its handling of the nagging Palestinian terrorism from Gaza is notably predictable and inadequate. Hundreds of arson and incendiary balloons are launched day after day these past three weeks. The regular IDF air and tank fire on Hamas military sites has had no effect at all, any more than the coronavirus outbreak afflicting the Gaza Strip on its balloon attacks. At one point, Hamas went so far as to add salvos of 15 rockets to the turmoil.

Wednesday saw 33 balloons floating in from Gaza to scorch mostly scrubland around Israel’s southern communities, but some also landed in the kindergarten playgrounds of local kibbutzim. Children were quickly stopped from picking them up. One carried a device containing 700 grams of explosives.

Even the Qatari emissary who arrived in Gaza with cash gifts for the Hamas-ruled Palestinian enclave failed to convince his hosts to halt their assaults. The terrorist chiefs simply pushed back with a fresh, longer list of demands addressed to Israel.