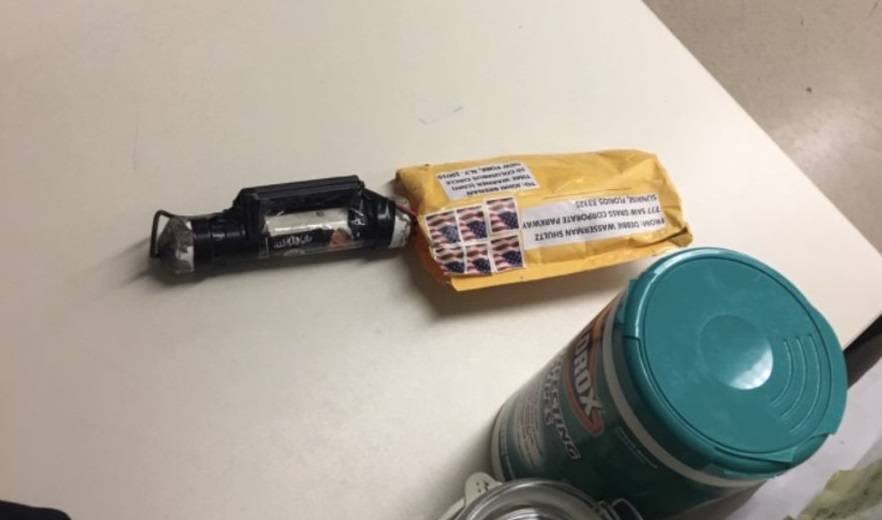 Similar packages containing crude pipe bombs and envelopes with white powder were addressed on Wednesday, Oct. 24 to the Clintons at their Chappaqua, New York home, to Barack Obama in Washington DC,  to John Brennan at the CNN New York studio, which was evacuated, and Democratic Wasserman in Florida via Eric Holder. Two days earlier, a similar package was delivered to Democratic donor and billionaire George Soros in Manhattan. The Secret Service screened the mail for the Clintons and Obama before it was delivered. An envelope addressed to New York Governor Andrew Cuomo proved innocent.

All the recipients are outspoken critics of President Donald Trump. Multiple agencies have launched a major probe into the source of the envelopes – local law enforcement, the FBI, the Secret Service and resources normally assigned to terrorist acts. New York Governor Cuomo called the packages an act of terror. The investigation’s initial finding is that all the packages came from a single source or group, whose identity is yet to be discovered.

The President strongly condemned this “despicable” act against public figures and pledged the full weight of all federal resources to bring those responsible to justice. “We must come together,” he urged, and voiced confidence that the investigation underway would soon get to the bottom of who was behind the packages. Vice President Mike Pence said there is no place for such acts in the United States.
The investigation is under exceptional pressure in the heated political atmosphere of the last weeks before midterm congressional elections on Nov. 6. Hillary Clinton campaigning for democratic candidates in Florida called on them to work for national unity.

DEBKAfile adds: The explosive packages dropped in the middle of one of the most divisive midterm campaigns the US has known. Democratic leaders say that if they gain a senate majority they will move to impeach President Trump, while Republican lawmakers accuse them of a strategy of resistance to, and persistent disruption of, all the president’s actions and policies, calling this conduct a catalyst for extreme, insane violence. Last month’s bitter partisan dispute over Judge Brett Kavanaugh’s appointment to the supreme court left another trail of poison between the two parties.