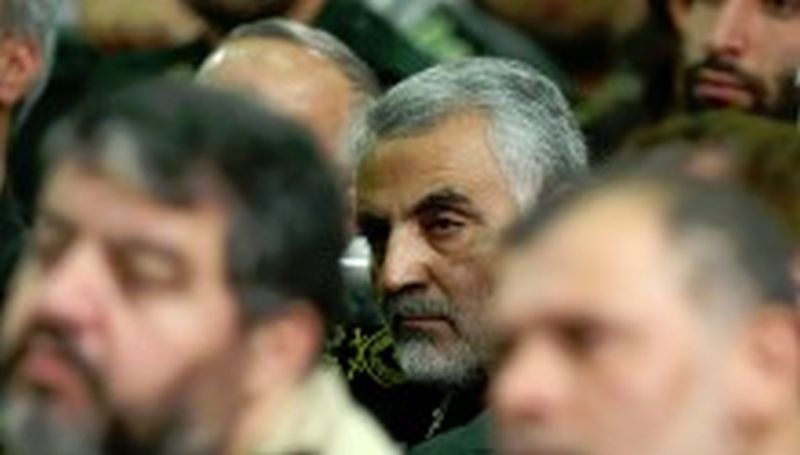 The IDF is launching a probe to find out whether the Combat Engineering Corps unit was observing standing safety protocols on Saturday, Feb. 17, when a bomb hidden at the Gaza border fence exploded and injured four servicemen. This protocol requires bomb disposal specialists from the Engineering Corps to make sure that the terrain under suspicion is clear of explosives before approaching it and if any are found, to neutralize them. But on Saturday, when the sappers approached a Palestinian flagpole behind the fence, it blew up, injuring an Engineering Crops officer and a Golani company commander and two soldiers. The bomb was hidden under cover of one of the rowdy anti-Israel rallies which are staged by Hamas every Friday.
IDF chiefs might have been better prepared for this trap had they taken note of a speech delivered on Wednesday, Feb. 14, by Maj. Gen. Qassem Soleimani. Commander of Iran’s Al Qods Force, the Iranian Revolutionary Guards branch responsible for external terror, who is also in charge of Iran’s Middle East operations.
He spoke on the 10th anniversary of the assassination of Imad Mughniyeh, Hizballah’s military chief, whose terrorist atrocities rivaled those of Osama Bin laden.

Soleimani exhorted Iran’s proxies and dependents in these terms: “Avenging the blood of Imad and people like him who have been martyred in Palestine, Lebanon and Iran under the instructions of the Zionist regime [Israel] is through annihilation of this child-murdering Zionist regime. The enemy understands this is certain to happen,” said the Iranian general at a commemoration ceremony in Teheran. He went on to emphasize that just launching missiles at Israel is not enough: “This regime must not survive!”

It triggered a major flareup between Israel and the Gaza Strip.

Massive Israeli air strikes hit 18 Hamas and other terrorist targets across the Gaza Strip Saturday night while a Palestinian rocket from Gaza struck a building in Shear Hanegev. No one was hurt. The targets included a terror tunnel under construction that was designed to run from the Zeitun refugee camp in central Gaza up to the Israeli border, as well as military outposts and compounds in the north and in Khan Younes in the south.

Mughniyeh was assassinated on Feb. 12, 2008 in a reportedly joint CIA-Mossad operation after he had been hunted for years for numerous bloody attacks on American, Israeli and Jewish targets. They included the 1992 bombing of the Israeli embassy in Buenos Aires, which killed 29 people. In Lebanon, he masterminded and executed the 1982 US Embassy bombing which left 63 dead, and the 1983 bombings which killed 241 US servicemen, as well numerous kidnappings and other savage atrocities.

19 thoughts on “Soleimani to Gaza terrorists: Missiles against Israel are not enough”