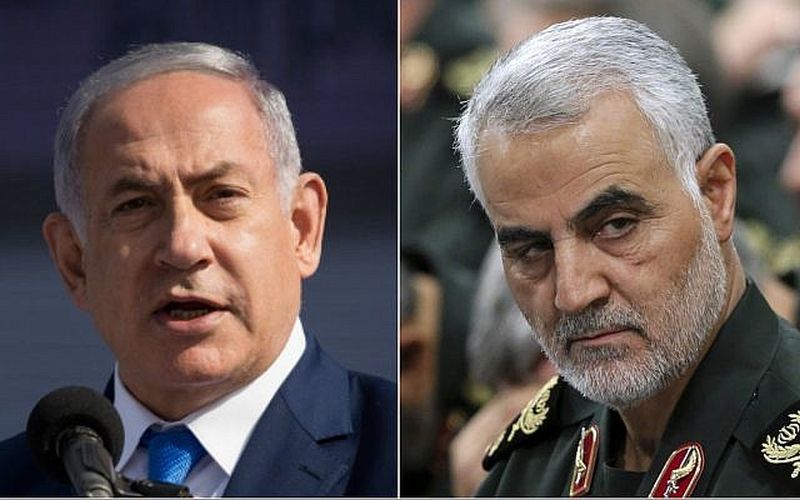 The plan to discredit Netanyahu’s credentials as “Mr Security”by inflaming simultaneous outbreaks of hostilities on four fronts is already in motion.

It kicked off with the help of Palestinian elements first in the Gaza Strip, then on the West Bank, before moving on to Syria and Lebanon.

On the Palestinian front, Netanyahu already has his back to the wall at home. His “containment” policy for Gaza is bitterly criticized for failing to check violent harassment by two terrorist organizations linked to Iran and Hizballah – Hamas and Islamic Jihad. People living within range of Gaza are echoed by opposition leaders when they slam the prime minister for relying on Egypt and Qatar to tame Hamas into accepting a truce by doling out $30m dollars to the Hamas rulers of Gaza, plus Israeli concessions.

Their grievances are regularly fueled by the sporadic rocket fire and armed intrusions conducted from Gaza by Hamas’ armed wing, Ezz e-Din al-Qassam under the direction of the Al Qods chief and Hizballah.

Netanyahu’s hands are tied – both by his understandings with Cairo and Qatar and his reluctance to send the IDF before an election on a major, high-cost operation to root out the Gaza terrorist bane. He is therefore branded by some circles as a vacillator on security.

On the West Bank, Gen. Soleimani has a dug-in Hizballah and Hamas terrorist infrastructure available for his second Palestinian front. Those cells have harnessed disaffected Fatah-Tanzim adherents who are fed up with Palestinian Authority chairman Mahmoud Abbas and resent the security cooperation the PA maintains with Israel. The result was that, after many months of isolated stabbing, car-ramming and shooting attacks against the Jews living in Judea and Samaria, Palestinian terrorists switched to a new and deadlier tactic. On Aug. 23, a Palestinian squad planted an IED (improvised explosive device) on a path to a beauty spot popular with Israeli trippers not far from Ramallah. Three days later, another roadside bomb was defused by IDF sappers near Nablus.

These upgraded tactics raise concern that a new wave of Palestinian terror is taking off in the style of the roadside bomb offensive with which Iran plagued US forces in Iraq in the years 2003-2007.

Most Israelis believe the Hamas regime in Gaza is responsible for this lethal switch in terror tactics, rather than Iran’s hidden hand, and blame Netanyahu.

With the Gaza and West Bank front simmering steadily, Soleimani last week moved on to the Syria and Lebanon fronts – only here, he ran into a major impediment: Israel‘s sharp shift over to preemptive offensive mode.

The Iranian general had scheduled the launch of explosive drone attacks against northern Israel for Aug. 22 and Aug. 24, to be carried out by Al Qods and Hizballah teams, which Soleimani had personally trained and instructed at a special Revolutionary Guards facility in Iran. Israel thwarted both attacks in the nick of time – the first by electronically disabling the UAVs about to take off; the second by a precise air strike on the base holding the drones and the launch teams south of Damascus.

However, far from abandoning his plans. Soleimani decided to press forward. Therefore, there is every expectation that the terrorist entities he controls – the IRGC’s Al Qods, the Lebanese Hizballah, Iraqi Shiite militias, and the Palestinian Hamas, Islamic Jihad and Tanzim – will explode into offensive action against Israel and its armed forces before election day.

Military experts stress that Soleimani’s chosen path is rife with hazards – not just for Israel but for Iran and its Middle East allies too. He may appreciate this judging by his comment on Monday, Aug. 26, after Israel’s strikes over Syria and Lebanon (detailed in separate articles): “These insane operations will surely be the last steps of the Zionist regime,” he tweeted.

The Iranian general, one of the most brilliant war leaders thrown up by Middle East conflicts in many years, seems to recognize that, when Israeli generals embark on “insane operations,” they are at their most dangerous. From the state’s earliest days, its war chiefs realized that a small country with few resources could only survive the dangers at every hand by “becoming insane,” namely, by launching unpredictable, unconventional and borderline crazy military operations for catching the enemy off-guard. Soleimani must also understand that those “insane operations” may cause inestimable damage to Iran and the allies he aims to activate against the Jewish state.

This was the context of the strong warning Netanyahu issued to Hizballah and the other forces the Iranian general was mustering to execute his plans.

“This is an Iranian initiative by Iranian direction and on behalf of Iran,” said the Israeli prime minister. “Any country – and I repeat, any country – that allows such attacks to be launched for its territory will suffer the consequences.”

Netanyahu spoke while standing on the Golan opposite the Syrian border flanked by IDF Chief of Staff Lt. Gen. Aviv Kochavi and the commanders of Israel’s Syrian and Lebanese border forces. His message to Soleimani was that Israel would not play by the Al Qods rulebook and had no qualms about taking the fight to Iraq as well as Syria and Lebanon, if need be.