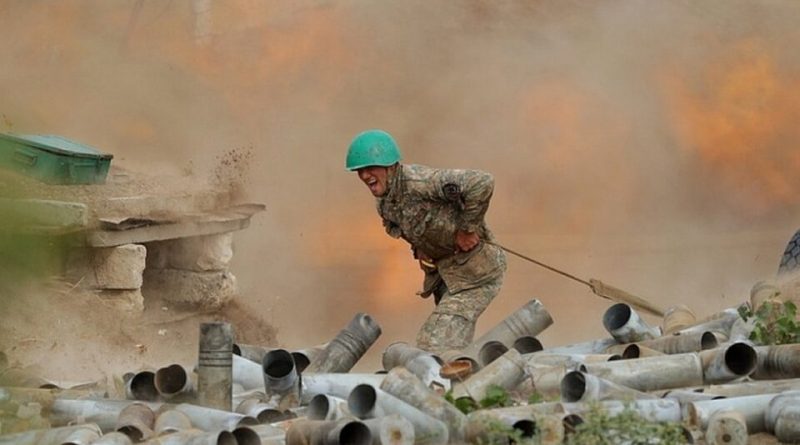 Armenian forces were battling in mid-October to drive Azeri forces back from the only land they captured in a month-long offensive: northern and southern pockets in disputed Nagorno Karabakh.

Wealthy Azerbaijan has been stocking up for years on advanced weapons systems from Russia, Turkey and Israel, while Armenia, although a Russia ally, received mostly dated hardware. Turkey delivered consignment of Bayraktar TB2 drones to Azerbaijan in June as part of a defense pact between them. Deployed by Turkey formerly in Libya and Syria, these UAVs are being actively used in Nagorno-Karabakh against the separatist regime.

And when Azerbaijan launched its offensive against the separatists on Sept. 27, it was also in possession of Turkish F-16 fighter jets left behind five days earlier after a joint war game. Ankara was additionally reported to have deployed to its Caucasian ally at least 1,500 pro-Turkish Syrian National Army fighters – which Ankara denies.

It is not clear whether Azerbaijan’s technological and numerical advantages will prove the decisive factor in the current conflict. Armenians see it as more existential rather than influence-driven, retaining the memory of the Ottoman Empire’s mass murder and expulsion of 1,5 of their brethren after WWI. They are therefore fighting fiercely, backed by their world communities, to retain every inch of Karabakh.

Yet the outcome of the conflict will depend very much on the intentions of their international sponsors, Turkey and Russia.

Turkey’s Recep Erdogan seeks to use it to expand his influence in the nearby Caucasus, especially after setbacks in a range of Middle East ventures. He intends to use Azerbaijan as a stepping-stone to coveted pastures and move fast so long as Russian President Vladimir Putin holds back from fully supporting Armenia.

Putin for his part has opted for a diplomatic role in resolving the conflict. Although Moscow’s attempt last week to broker a ceasefire to stop the hostilities foundered in hours, Putin intends to maintain a controlling hand on any eventual political process.

For now, his position is ambivalent. The Russian leader is holding back from rendering Armenian all-out military support so as to avoid pushing Azerbaijan all the way into Turkey’s arms. But at the end of the day, Moscow will have to line up with Yerevan out of two compulsions: For Putin, Armenia and its big Russian military base there are a counterweight for Turkey’s expansionist drive in the Caucasus and beyond, including ballast for the Russian stronghold in Syria.

Secondly, allowing Armenia to cede a full measure of control over Nagorno-Karabakh to Azerbaijan and Turkey, would rebound on Moscow’s leverage over other former Soviet regions.

The Kremlin would prefer to integrate Azerbaijan in Russia’s security and economic organisms of which Armenia is a member.  Baku’s President Ilham Aliyev is, however, in no one’s pocket. As Erdogan has discovered, he is a more independent-minded decision maker than some of his former partners.

Azerbaijan has so far not captured enough territory for a strong hand in negotiations or for making a maximalist demand for Armenian forces to withdraw from the Armenian-populated region embedded in its territory. Baku is further inhibited by additional factors: Armenian forces hold the high ground in the mountainous Karabakh. A winter campaign would entail high casualties, military and civilian and major destruction. Already, civilian casualties are mounting up on a disastrous scale. prolonged conflict would, moreover, bring unwanted international intervention and dent Azerbaijan’s energy trade.

However, Muslim Azerbaijan is bigger, stronger and richer than Christian Armenia, and Baku counts on Yerevan, short of full Russian backing, to blink first.