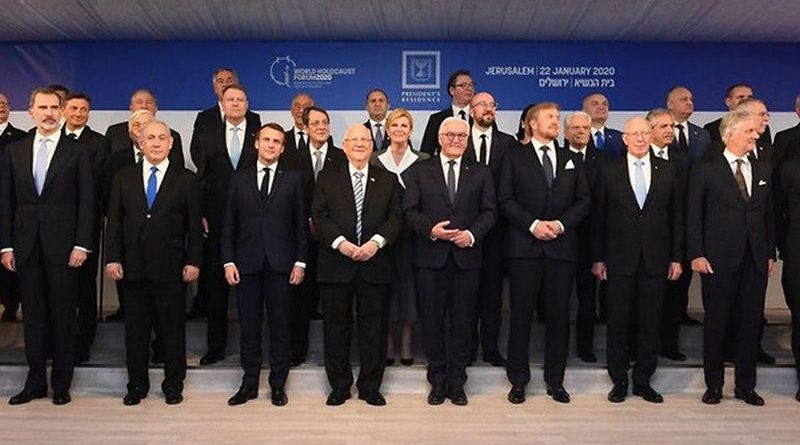 For Israel, the gathering of dozens of world leaders, kings, presidents and prime ministers in Jerusalem on Jan. 23, for the 75th anniversary of the liberation of Auschwitz-Birkenau was a larger-than-expected diplomatic event. It also broadcast unprecedented international acceptance of Jerusalem as Israel’s capital.

Commemorating the victims of Nazi horrors, they all freely denounced racism and antisemitism in their speeches under the event’s banner: To remember the holocaust and to fight anti-Semitism. Invited to address the central event at the Yad Vashem Holocaust Memorial center on Thursday afternoon were leaders of the four main Allied powers of WWII:  Vice President Mike Pence, President Vladimir Putin of Russia, Prince Charles of Britain and President Emmanuel Macron of France. Germany’s president, Frank-Walter Steinmeier, who has called World War II a “German crime” apologized for the Holocaust. They were followed by the hosts: President Reuven Rivlin and Prime Minister Benjamin Netanyahu.

During the day, Putin, with Netanyahu alongside him, unveiled a monument in Jerusalem’s Sacher Park to the 800,000 victims of the siege of Leningrad.

There was also a formal dinner for the invited world leaders at the President’s Residence in Jerusalem.

But missing from the entire occasion was a formal group declaration collectively denouncing antisemitism and solemnly pledging concrete steps for fighting it. This declaration might have endorsed the definition of antisemitism authorized by the International Remembrance Alliance – an 11-point definition adopted so far by only 19 countries.
Too much weight was placed on the presence of the Russian president and his warm regard for the prime minister. After all, Israel’s most important and lasting ally is the United States, which Netanyahu emphasized by accompanying Vice President Mike Pence on his visit to the Western Wall. Furthermore, placing the case of Naama Yissachar at the forefront of Putin’s visit was totally disproportionate and inappropriate. It has no relation to Holocaust remembrance; nor is she a heroic Prisoner of Zion, even if she was unjustly convicted by a Russian court.

All in all, after the brilliant array of presidents, crowned heads and dignitaries make their departure and return home, it is hard to see this glittering diplomatic event generating a real war on the surging antisemitism blighting too many western countries.

19 thoughts on “Speeches -yes, but no collective declaration on antisemitism from 50 world leaders at the Auschwitz liberation anniversary in Jerusalem”