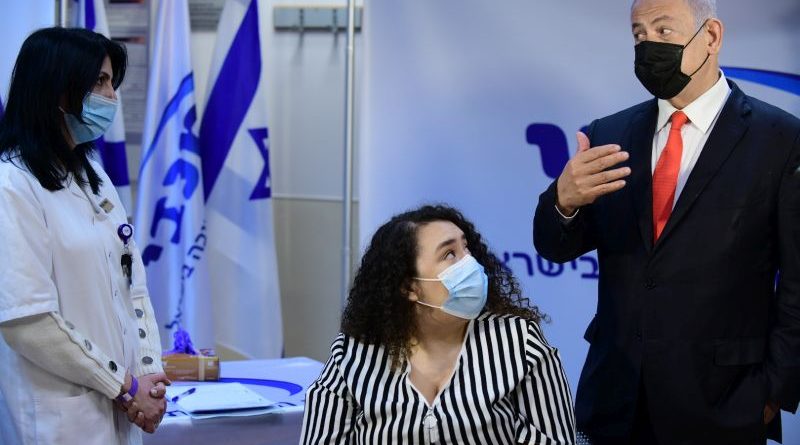 Vaccinated yet? Got your own party? This is how Israelis may greet one another while queuing up for anti-covid shots or calculating the odds of the new parties springing up to topple Netanyahu in the March 23 election, Israel’s fourth in two years.

This time, the once stalwart supporters of Likud and its leader, are battling it out to join the roster of his would-be successors, having despaired of his longevity. But Netanyahu, after breaking up the left-of-center camp challenging him into unsustainable fragments, is now awarding this special treatment to his own camp.

The problem of the rightist challengers is that their target continues to tower over national political discourse and the harder they fight him, the more he gains in the polls. This week, the Likud leader climbed out of the low twenties trough by getting hold of enough coronavirus vaccines to inject millions of Israel with a promise that Israel would soon be rescued from the nightmare catastrophe visiting many other countries.

His two main rivals, two former Likud ministers, Gideon Saar who bolted the party and established New Hope last December and Yemina’s Naftali Bennett, each soared past the 20 mark three months ago, and dropped Netanyahu’s Likud into the twenties. Now, they are in the low teens, while the prime minister has shot past the 30-mark. That is because Netanyahu is making the news work for him, while up to his old tricks of putting a cat among the pigeons of his opponents.

Bennett was left stranded this week when Bezalel Smotritch, still a youthful 40, broke with his former partner to fight for the national-religious, pro-settlement ticket with his own party. He was adopted by Netanyahu who saw his far-right ideology coupled with administrative skills. Gideon Saar, whose defection was widely hailed as a major threat to the prime minister, has quickly lost traction in the shadow of the master.

Netanyahu’s demolition tactics have worked for a decade on the left and left-of-center groupings. Somehow, the parties which defied his premiership with bright promises of change sank into internal strife and smashed into smithereens. The veteran socialist Labor party suffered that fate some time ago. Today, it has no hope of passing the 3.75pc threshold for a place in the Knesset.

Kahol Lavan. which ran three times on the “Anyone but Bibi” ticket over his corruption trial, lost one segment last May when Benny Gantz broke with his partner Yair Lapid’s Future to join the Netanyahu coalition government. Lapid has since lost two more allie: His sidekick Ofer Shelah defected to set up a party of his own, Tnufa, and former army Chief Moshe Ya’alon and his Telem faction split off last month and are loudly touting his superior credentials for displacing Netanyahu as prime minister.

Disunity also assailed the Joint List of Arab parties, formerly the third largest in the Knesset,after the prime minister started cultivating Mansour Abbas, leader of Ra’am, one of its four members.

Gantz himself, who often crossed the Likud leader, did not profit from his venture onto Netanyahu terrain. His party is being hammered in the polls to the point that this week he offered to cede any leadership pretensions for the sake of a merger – for instance, with the Tel Aviv Mayor Ron Huldai’s new party, The Israelis, or back to the party which launched him in politics – if Lapid will have him.

The talk of new parties is making way for crisscrossing moves for mergers ahead of the Feb. 3 date for registering slates eligible for election. The big parties are in the market for attractive acquisitions. An eclectic assortment of small fry with little hope of reaching the Knesset is estimated to account for 14pc of all the ballots being trashed. They are being eyed by the big boys as likely assets. Among them, are The Shulmans, set up by shopkeepers put out of business the coronavirus; the New Economic Party led by former State Accountant-General Yaron Zelekha, Derekh Eretz, which hopped from Kahol Lavan to New Hope, and the new Seniors’ Party founded by former Mossad chief Danny Yatom.

Netanyahu appears to be satisfied with having polished off his rivals, or at least cornered them into defensive positions, while his regular ultra-religious coalition allies, Shas and Torah Judaism, do not seem about to stray. His bribery trial drags on, but no long hits the headlines. The prime minister appears to have opted for a campaign strategy for now that does not hinge on popular vote-catching rallies, speechmaking or ads. Trailed by photographers, he turns up at telegenic sites, like three Arab towns, which he has never bothered about before, vaccination stations and the airport to personally take delivery of bulk deliveries of the covid vaccines. His opponents may be cowed for now, but a tougher enemy, the pandemic, is not lying down for his promises to restore the country to near normal by March. Instead, a third week of lockdown or more lies ahead and the forecast is bleak.