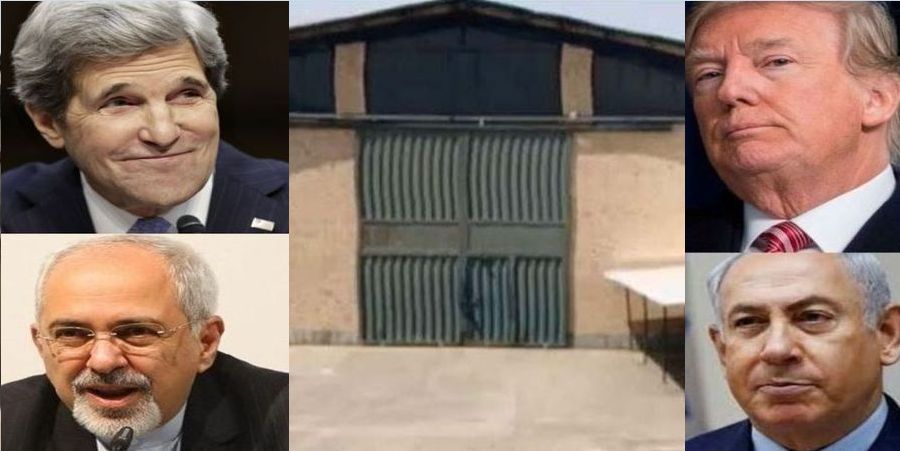 John Kerry is engaged in stealth diplomacy to scuttle Trump’s anti-Iran policy. In Israel, hostile media rain on Netanyahu’s Iranian Atomic Archive coup.
On Saturday, May 5, the Boston Globe revealed former US Secretary of State John Kerry as digging out old contacts and lining them up to counteract President Donald Trump’s rejection of the 2015 nuclear accord with Iran. Kerry sat down with German President Frank-Walter Steinmeier, European Union’s Federica Mogherini and French President Emmanuel Macron. Kerry also got together twice with Iranian Foreign Minister Javad Zarif in New York “to strategize” on salvaging a deal they spent years negotiating during the Obama administration and making sure that no “fixes” were approved.

Macron’s efforts to negotiate amendments to the accord and so enable President Trump to approve its continuation on May12 was stymied. Tehran is standing adamantly by its refusal to renegotiate or amend the original accord, warning that if US sanctions are re-imposed, Iran would immediately switch on its nuclear program and go back to high-grade uranium enrichment.
Kerry’s shadow diplomacy therefore toughened Tehran’s hard line and its the conviction that Trump in his weakened political position at home would not risk pulling the US out of the nuclear accord. Kerry’s campaign struck this chord amid the scandals landing on the president’s head, including the claims of an affair, true or false, by the porn star Stormy Daniels and the muddle over the alleged payout for her silence; the special counsel Robert Mueller’s flagging, circuitous probe of Russian meddling in the 2016 presidential campaign; the tariff war with China; and Democratic gains ahead of midterm congressional elections. Their eye is now on a majority for carrying through the president’s impeachment. In short, the nuclear accord with Iran was tossed into the opposition’s battle to discredit Donald Trump and remove him from office.

The president is not without his own tools of war, especially the popular momentum for sweeping away the old political order which he fronts after it swept him to power. But in the coming weeks, he is also looking forward to a summit with the North Korean ruler and a deal for denuclearization, a global, historic feat which none of his predecessors ever came close to.

There are many equivalents for the siege on Trump in the sustained media persecution of Prime Minister Binyamin Netanyahu and his family. This no-holds-barred chase was briefly interrupted by the sense of national unity generated by Israel’s 70th anniversary earlier this month, celebrated with gusto by the population at large. It was followed by the unifying sense that a military confrontation with Iran was at hand. But last week, the personal and political persecution of Netanyahu was resumed. The media picked up on obscure minutiae from the years of dragging “investigations” of his alleged misdemeanors. Sarah Netanyahu, the prime minister’s wife, was singled out as the latest victim. She is now depicted as haggling over the size of the fine she is said to be willing to pay to avoid prosecution for allegedly misappropriating state allocations for the upkeep of the prime minister’s residence. TV “commentators” are speculating widely about her mental state. The sums involved are cents rather than dollars and her denial of the entire story as made-up from beginning to end is sneeringly glossed over by television “commentators.” No considerations of privacy or humanity apply when it comes to the Netanyahus.

Neither was the prime minister allowed to bask for a second in the light of a remarkable Israeli intelligence coup, the theft of Iran’s top-secret Atomic Archive from a well-guarded hidden location in Tehran. The prime minister was criticized for showcasing the feat in a power point presentation on television. It was picked up around the world and proved that the Islamic Republic had lied when its rulers denied that developing a nuclear bomb was contrary to their religious, and its officials, including Zarif, continued to lie. Netanyahu was accused by his detractors at home of an overly “theatrical” performance. Yair Lapid, head of the opposition Future Party, claimed that the revelation irreversibly damaged the intelligence service by revealing its methods (which he did not). Netanyahu was told that he should have sat on the discovery, despite the fact that the operation’s entire purpose was to produce evidence for the world to see that Israel’s arch enemy had negotiated an accord with the world powers in bad faith and should not be trusted in future. The Atomic Archive’s exposure supported Israel’s joint campaign with the Trump administration to work for a better deal with Tehran and get rid of the ballistic missiles threatening the Jewish state. These considerations are clearly not worth the attention of Netanyahu’s enemies. It appears that all means are justified to further the goal of removing the Israeli prime minister, as in the case of  President Donald Trump – even when national security is at stake.