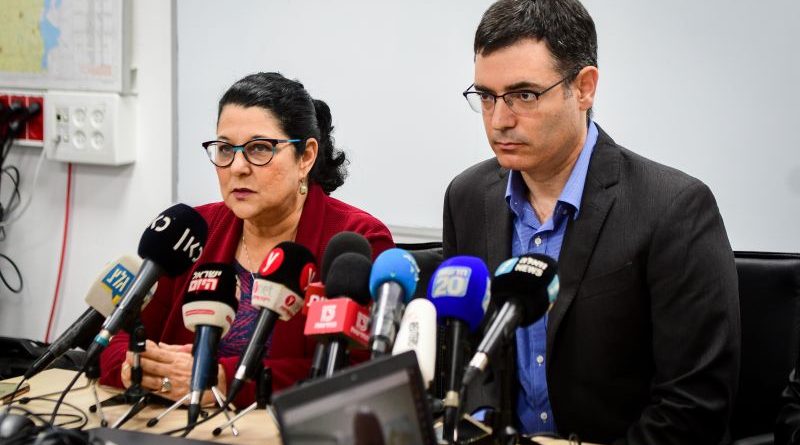 Top Health Ministry officials were persuaded in a conference with the prime minister and other ministers on Friday, May 29, to delay an across-the-board closure of high schools until they held a second review on Saturday afternoon. The health officials had planned to announce the shutdown in a special broadcast briefing to the public on Friday evening. In the event, Prof. Sigal Sadetzky, head of public health, revealed at the briefing that the alarming spike in virus infection in the last 48 hours had reached 85 cases cases (updated since to 101) with the focus on 31 schools that were spread out widely across geographic regions. This was Sadetzky’s answer to demands by some ministers and local authorities for spot closures of affected schools rather than a comprehensive measure.
Outgoing Director General Moshe Bar Siman Tov reported that the final decision on this question would be taken at the second conference with the ministers on the basis of the new data coming in on Saturday morning. There would then be a second briefing to the public on Saturday night.

Siman Tov revealed that the last tests had shown positive coronavirus results jumping from half a percent to 1.5pc and blamed public “euphoria and complacency. Go back to the guidelines,” he urged. He also advised cutting down on visits to grandparents, who are most vulnerable to infection. A second wave was not inevitable, Siman Tov stressed, it depends on the public sticking to the rules:  face masks, hygiene and social distancing. “The virus is still with us but we are still in control,” he said.

Meanwhile, the Hebrew Gymnasia in Jerusalem, hit hard by coronavirus last week, reported that its infection rate had rocketed to 78 ( 64 students and 14 teachers) following the first 700 tests conducted on the 1,200 students and 200 teachers. The same number of tests are yet to come. Therefore, one school accounted for the bulk of the new cases.

The Ministry of Health is weighing steps to counter the sudden spike in coronavirus infection by 64 new cases in 24 hours to 16,872 – after two weeks of steady decline. The death toll rose from 281 to 284. Asked if a second wave of the pandemic was at hand, health officials warned that people had become too complacent. This week saw the streets, nature reserves, shops and beaches crowded with relaxed throngs basking in the cool sunny weather. Many had abandoned their face masks and ignored the requisite social distancing, although the waiters and staff at reopened eateries adhered strictly to the rules.

However, an alarming proportion of the new coronavirus cases are students and teachers who had been back at school for two weeks after two months of lockdown.  At Jerusalem’s Hebrew Gymnasia, 18 new cases have been confirmed – 11 students and 7 teaching staff. The school was closed at week’s end and remote instruction reinstated from Sunday for the 1,400 quarantined teaching staff and student body. Magen David hurriedly set up facilities for testing both groups on Thursday.

The Mayor of Bat Yam, adjacent to Tel Aviv, reported two pupils from different schools had come down with coronavirus, after which 28 pupils in one and 35 in the other, as well as 14 staff members, were sent into quarantine. In another small town, Or Yehuda, three members of the same family were confirmed with the virus, two of the three children attending different schools. Both schools sent children and staff into quarantine.

Of the 1,909 Israelis with active cases of coronavirus on Friday, 37 are serious and 36 on ventilators. According to Health Ministry data, of the 4,182 coronavirus tests conducted on Thursday, 1.5pc came out positive compared with 0.4-0.7pc in the past six days.

All the same, new Health Minister Yuli Edelstein decided to reopen next week academic institutions, youth movements, informal education frameworks and Hebrew language “ulpanim” for new immigrants. They were all ordered to adhere to health guidelines or face penalties.