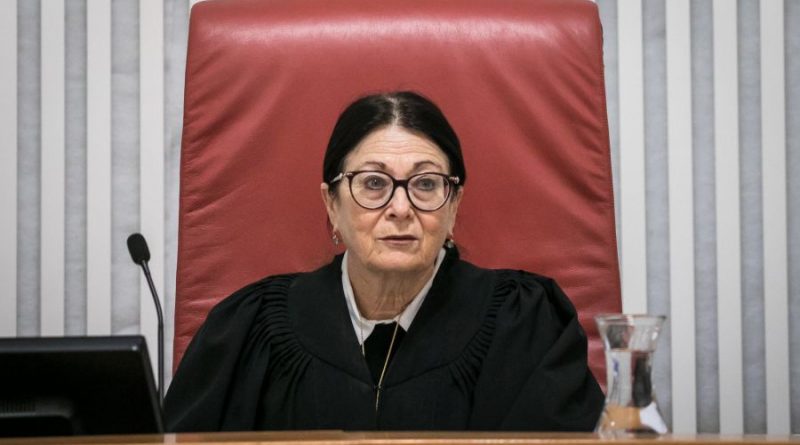 Chief Justice Esther Hayut led a Supreme Court order for Knesset Speaker Yuli Edelstein (Likud) to state by Monday, March 23, at 9:00 p.m. whether by Wednesday at 5:00 p.m. he will schedule a vote for the election of a new Knesset Speaker in his stead. The court order came in response to an opposition Kahol Lavan petition filed ahead of the first session of the 23rd Knesset taking place on Monday afternoon.

Tourism Minister Yariv Levin (Likud) condemned the supreme court for seeking to override the legislature and making it a rubber stamp. He stressed that no one but the Speaker was entitled to convene the Knesset and conduct its proceedings and urged MK Edelstein to defy the order and stand by the power democratically vested in him alone.

This contest accentuates a longstanding constitutional dispute over the separation of powers in Israel. Its fierce outbreak at this time comes on top of the political deadlock following three consecutive elections in a year and the coronavirus emergency as the tally of cases edges upward.

Edelstein’s removal is the key to opening the door for the opposition Kahol-Lavon’s drive to control parliamentary oversight of the government’s handling of the pandemic crisis and to determine the makeup of the main parliamentary committees. Overriding these goals is an opposition drive to enact a law for disqualifying any leader facing criminal charges from holding office as prime minister – their recipe for getting rid of Likud leader Binyamin Netanyahu. Likud Speaker Edelstein is the last big obstacle in the opposition’s path to this all-consuming objective.
Kahol Lavan leader Benny Gantz was tasked with the first shot at forming a government after the March 2 general election. He was endorsed by 61 MKs compared with Netanyahu’s 58. But he does not command this number for forming a government, since at least two if not three opposition members refuse to go along with a government that relies on backing from the Joint Arab List.

Nonetheless, on Sunday, Gantz rejected both of Netanyahu’s alternative proposals for joining an emergency unity government on the basis of parity between the two parties. He also shot down the Likud leader’s precondition for a shared government which was to drop the scheme to replace Edelstein.

On Monday, all 58 members of the Likud-led right-wing-religious bloc announced a boycott of the new Knesset session, accusing Kahol Lavan of “dictatorial, destructive conduct.”  The session is heavily overshadowed by the coronavirus pandemic which by Monday had infected 1,238 Israelis, 24 seriously, and caused one death. In keeping with the social distancing rules laid down by the Ministry of Health, lawmakers will enter the chamber in groups of six. Those wishing to speak will take their turn and the others will view the proceedings on screens outside.