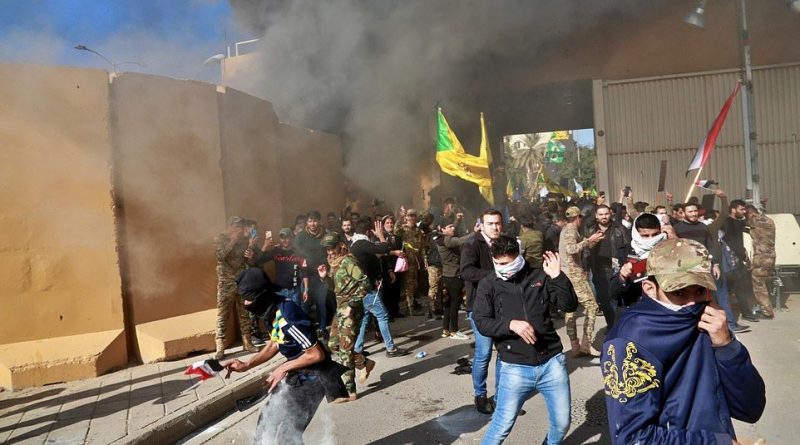 Iran’s leaders are not likely to be deterred by US President Donald Trump’s warning on Dec. 31 that Tehran would be held responsible for attacks on US forces in Iraq and the storming of the US embassy in Baghdad. The mob of thousands of Kataib Hezballah supporters who broke into the embassy on Tuesday heralded the reverse scenario. Iran believes that ramping up the pressure on US forces in Iraq will serve its interests in Iraq as well as in Syria.
DEBKAfile’s military and intelligence sources note three motivations for Tehran’s anti-US belligerent stance at this time:

1. By fighting the “American threat to Baghdad,” Iran hopes to find a unifying slogan for recovering the allegiance of the Shiite masses who are protesting across southern Iraq and Baghdad against excessive Iranian influence in Baghdad.

2. The Kata’ib Hezballah militia’s multiple rocket attack on the US K-1 base near KIrkuk on Saturday, Dec. 28, in which a US civilian contractor was killed and at least four American soldiers injured, was not intended as a one-off. It was the signal for this Shiite militia to move from sporadic, single rocket attacks on US military sites to heavy bombardments on a scale that recalls the assaults staged against US forces by pro-Iranian organizations 14 years ago.

Hezballah is not the only aggressive militia at the disposal of Al Qods chief Gen. Qassem Soleimani for this strategy. He can call on at least another half a dozen Shiite paramilitary groups capable and willing to fight the “American Satan.”

3. The US takeover of the gas fields of eastern Syria and its deepening military presence along the Syrian-Iraq border are a major impediment to Tehran’s aspirations for a direct land route via Iraq to Syria and Lebanon.

Tehran sees that the entire logistic and military framework it painstakingly set up on both sides of Syrian-Iraqi border have been under constant US and Israeli air assault since early November.
For all these reasons, Tehran believes it has plenty to gain by battling the US presence in Iraq and Syria and may be expected at some point to settle its score with Israel as well.

90 thoughts on “Surge of Shiite militia attacks in store for US forces in Iraq, possibly Israel too”