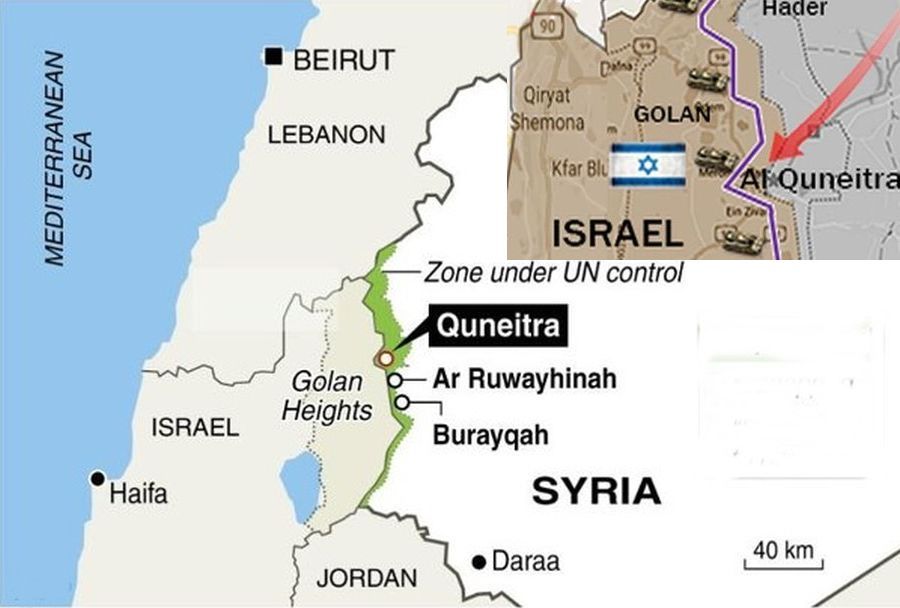 The army column is expected to reach Israel’s southern Golan border by the end of the week. On its way north from Daraa on Monday, July 9, this mixed force of Syrian army, Hizballah and Iraqi and Afghan Shiite militias, under Rev Guards Gen. Qassam Soleimani’s command, captured three rebel villages: Kharb al-Shahm, Zaizoun and Tal Shihab. The force’s first objective is the Syrian-Jordanian border and the Yarmouk region held by the ISIS-affiliated Khalid ibn al Walid Army. These extremists are likely to fold quickly under the assault and so, by the end of the week, the column will be free to turn towards the Israeli border along the southern Golan.

DEBKAfile’s military sources report that, unless Israel takes preventive action in time, this Syrian-Iranian push will link up with other forces to encircle the Quneitra region opposite the Israeli Golan from the east, south and North. Yet no action has been taken, although the new Syrian military advance threatens to deposit Hizballah and pro-Iranian militias – not just opposite the Golan but along the Israeli-Syrian border east of the Sea of Galilee and Hamat Gader.
The Syrian army and its allies are therefore moving ever closer to the Israeli border after their initial thrust, which was first revealed by DEBKAfile on July 9. Bashar Assad has brought his Quneitra operation forward for the purpose of thwarting any accommodations President Vladimir Putin may reach with Binyamin Netanyahu when they talk in Moscow on Wednesday, July 11.

The Syrian army began attacking rebel positions around Quneitra opposite Israel’s Golan border on Monday, July 9, DEBKAfile’s military sources reveal. For some hours, Syrian forces have been pounding rebel positions at Nabi Sakhar east of Quneitra with heavy tank and artillery fire as well as Golan 1000 rocket launchers. For now, the rebels hold superior fire power, but are short of manpower for holding the wider region.

It is not clear whether the Syrian forces reached the Quneitra region from Daraa where fighting continues, or from the north. In communiques in the last few hours, the Syrian high command in Damascus claimed the rebels are supported by the IDF. According to the official Syrian news agency SANA, “the jihadist rebels ae currently under the protection of the Israeli Defense Forces” – although no details are offered. There is no official word from Israel.
DEBKAfile’s military sources say that the launching of the Syrian Quneitra offensive should not have come as a surprise to the Netanyahu government or the IDF since there were plenty of signs it was on the way. In Daraa, the first part of Syria’s drive to seize control of the southwest is jumping back and forth, because neither the Assad regime nor the Syrian army accept the ceasefire deal which the Russians negotiated with local rebel leaders. On Sunday, therefore, the Syrian air force renewed its strikes on rebel positions in Daraa and Syrian, Hizballah and pro-Iranian Shiite militias stand ready to go into Daraa City. This would be in repudiation of the Russian-rebel deal which restricted entry to Syrian civilian administrators.

The rulers of Damascus suspect the Russians are aiming to broker the same ceasefire deal with the rebels of Queiitra. This would leave the anti-Assad fighters in place and in control of their villages, in return for surrendering their heavy and medium arms.

The Syrian allegation of an Israeli air attack on the big Syrian T-4 air base Sunday night clearly pointed to its next target: the Syrian Golan town of Quneitra opposite IDF lines. The giveaway came from the content of the Syrian communique, which was framed to  implicate all of Assad’s enemies in the purported attack. The Israeli jets allegedly flew in from Jordan over the US outpost at Al Tanf.

By setting up this ploy four days before President Vladimir Putin receives Prime Minister Binyamin Netanyahu in Moscow on Wednesday, Bashar Assad was giving Moscow due warning that he would play the Quneitra offensive by his own rule book not the Russians.’ It remains to be seen how the Syrian army’s Quneitra operation, launched on Monday, plays out – whether it is restricted to small skirmishes or spreads more widely.