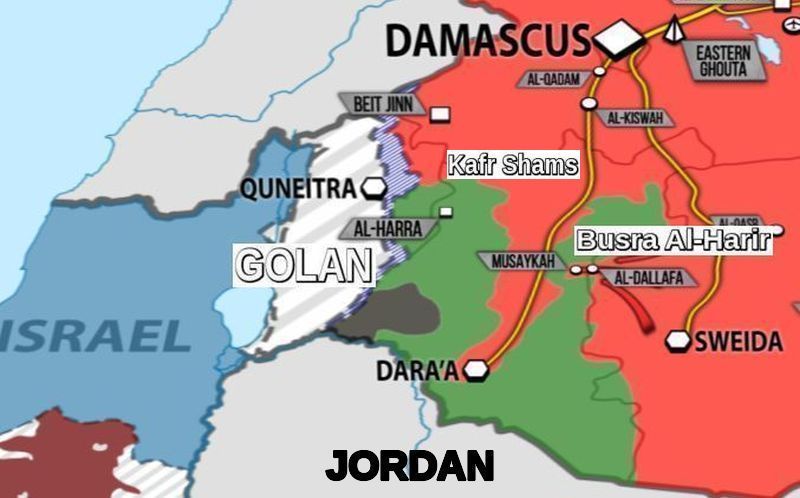 The Syrian army veered southwest Wednesday, June 20, to seize rebel-held Kfar Shams and Busra Al-Harir near the Israeli and Jordanian borders. Israel has not intervened as thousands flee the area under Syrian shelling, DEBKAfile’s military sources report. Syrian strategists, instead of launching the promised major offensive to capture rebel-held Quneitra opposite the Israeli Golan and Daraa on the Jordanian border, appear to be running the operation in small steps. Kfar Shams is situated north of Daraa and Busra al-Harir east of Quneitra (see attached map). The fall of Kfar Shams drives a hole in the rebel formations ranged along the Syrian-Israeli border and brings the Syrian army several kilometers closer to Israel’s Golan border; the fall of Busra al-Harir cuts the rebels’ supply lines from the north and severs their defense array along the Jordanian border.

Hamas and Islamic Jihad strategists in the Gaza Strip are not blind. They draw their own conclusions from the lack of IDF intervention as the Syrian Army moves closer to Israel’s northern border, despite high-sounding threats from Israel’s leaders.  Indeed, the Palestinian terrorist leaders seemed less concerned than the Israelis living near the Gaza Strip by the war drums of an approaching conflict beaten on Wednesday at the highest level by Prime Minister Binyamin Netanyahu, Defense Minister Avigdor Lieberman and Chief of Staff Lt. Gen. Gady Eisenkot after a Palestinian barrage of 45 rockets. The joint communique issued by Hamas and Jihad in reply was defiant: It stressed an equation of “a bomb for a bomb!” and vowed: “The enemy will not be allowed to force its aggressive equation on our people and the resistance.”

For now, our military sources note, the Palestinian terrorists are being allowed to set the pace and make the rules of the contest with Israel. That is because Hamas has been able to challenge Israel from the Gaza Strip for four months without the IDF stalling its belligerent momentum.