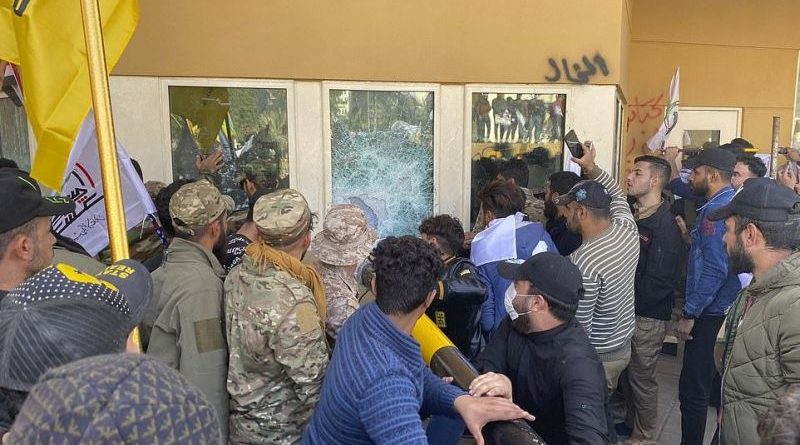 It took President Donald Trump four months to change course from non-response to the devastating Iranian cruise missile-cum-drone attack on Saudi oil fields, remove the gloves and start punishing Iran for its aggression against US and allied targets in the Middle East. But Tehran is in no mood to back down.

On Sunday, Dec. 29, the US Air Force conducted “precision defensive strikes” against five centers of the pro-Iranian Iraqi Shiite Kata’ib Hezballah militia on both sides of the Iraq-Syrian border. The 30 dead included militia fighters as well as officers of Al Qods, the external arm of Iran’s Revolutionary Guards Corps (IRGC). The attack followed swiftly on the 30 rockets fired by that militia into the US K-1 base near Kirkuk, killing an American civilian contractor and injuring four American soldiers.

Within 24 hours, hundreds of angry Shiite militia supporters were mobbing the US embassy in Baghdad’s fortified Green Zone. Trump thereupon blamed Iran in a tweet: “Iran killed an American contractor, wounding many. We strongly responded, and always will. Now Iran is orchestrating an attack on the US Embassy in Iraq. They will be held fully responsible.”

This was a far cry from his language in recent months. When the IRGC shot down a US surveillance drone over the Gulf in summer and crowed over its success, the US president called it “a big mistake.” He is now holding Iran directly responsible for its aggressive actions against America and its allies in the region and, moreover. authorized a broad reprisal.

US Defense Secretary Mark Esper announced that another 750 troops from the 82nd Airborne Division’s rapid response unit are preparing to deploy in the coming days in Iraq, following the storming of the US embassy in Baghdad. The embassy itself was quickly packed with Marine reinforcements.

This change of posture was first noted on Dec. 7 by DEBKAfile, which revealed in an exclusive report, that the White House had decided to scrap its policy of restraint in the face of spiraling Iranian attacks and henceforth retaliate every time. This decision carried the US-Iranian contest onto a new level, from the diplomatic and verbal to a straight military duel.

But how far is President Trump willing to go in this new phase of the contest with Iran? His intentions are hard to pin down. Talking to reporters in Florida on Dec. 31, he said he did not see a war with Iran happening. “It would not be a good idea for Iran. I like peace.” Commenting on the riots at the US embassy, he said: “I think it’s been handled very well. We had some great warriors come in. This will not be a Benghazi… they got in very quickly.”

Iran predictably denied any role in the mobbing of the embassy and accused America of “surprising audacity” for blaming Tehran after “at least 25 Iraqis were savagely killed.”

Tehran is obviously in no mood to abandon its drive for controlling influence in Baghdad and America’s ouster, and sees clashes with the US as serving its interests. For months, Shiite protesters have been clamoring massively against Tehran’s influence on their government. In search of a unifying element, Al Qods chief Gen. Qassem Soleimani, who holds the Tehran’s “Iraq dossier,” believes that this anti-Iran fury can be turned against the American “interlopers” with the help of “heroic operations” by its pawn, the Kata’ib Hezballah militia. By these slogans, Tehran hopes to mend its fences in Baghdad.

The Kata’ib Hezballah (Hezballah Brigades) has an impressive history of 13 years fighting the American army on Tehran’s behalf, DEBKA Weekly’s military sources report. It is the ideal instrument in Gen. Soleimani’s mind for uniting the rival Shiite factions in Iraq behind big brother in Tehran against the American foe.

This fierce militia came to prominence in 2007 with raids on US and coalition forces in Iraq. In mid-2008, US and Iraqi forces conducted a crackdown on the various “special groups” – the American term for Iran-backed militias in the country. At least 30 Hezballah leaders were captured and many more fled to Iran.

On July 2, 2009, the US State Department added Hezballah to its list of Foreign Terrorist Organizations, holding it responsible for multiple IED bombings, mortar, rocket and RPG attacks and sniper operations against US and Iraqi forces and their headquarters in the fortified Green Zone of Baghdad.

On July 13, 2010, Gen. Ray Odiemo, US commander in Iraq, accused Kata’ib Hezballah as orchestrating the threats to American bases in Iraq.

Between 2016 and 2019, Gen. Soleimani poured funds and hardware into the group for its transformation into the Iraqi version of the Al Qods Brigades. The Iraqi Hezballah was then designated “a special force” for operations in Lebanon and Syria and attacks on Israel. The group is currently furnished with a complete arsenal for tank and missile units, rockets, anti-air weapons, drones and even an air force of assault helicopters made in Iran. In view of the Al Qods chief’s big plans for Kata’ib Hezballah, President Trump may soon be confronted with his next critical decision. He will find that the 5,000 US troops currently deployed in Iraq are not up to their dual tasks of holding off and defeating a militia, which Tehran has upgraded to the level of a small army, while also acting as the logistic rear support for the US operation in Syria (which is dealt with in a separate article).